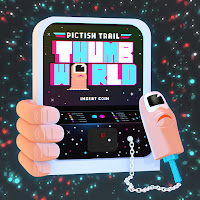 Pictish Trail came into my life with its previous album, 'Future Echoes', in the summer of 2018. I have to admit that I can't recall the album. Fact is that I once again like the music I'm hearing, so I ought to get 'Future Trail' out of its hiding place to try it once more.

Pictish Trail is Johnny Lynch. A Scot working under the name Pictish Trail. The music he makes comes with a picture in my mind. The picture of a man making his music in isolation, alone. It may be totally incorrect but this image presents itself to me pretty vividly.

That music is somewhat downcast but also quite interesting to listen to. The downcast side makes that I cannot listen to the album under all circumstances. When I do a world opens where Pictish Trail either moves towards dance influenced modern music while hiding under a see through veil of psychedelia or presents a far more traditionally crafted song. by way of this combination, decades in music come together that somehow ought not to be connected.

What makes the album intriguing to listen to, are the sonic ideas that go into it. Several musical surprises come by, making a song sparkle or just as easily estrange. It can literally go either way and within the same song. This makes Thumb World an album that surprises all the way.

In 'Fear Anchor' Sparklehorse is lifted from obscurity. As if Mark Linkous was raised from the dead. Lynch could have fooled me here. 'Fear Anchor' is also one of the most solid songs Sparklehorse would have released. The addition of a Mellotron (sound?) is exquisite actually. This is easily one of my favourite songs on Thumb World. It has so many layers to lose myself in. A big tip of my hat, Mr. Lynch.

With 'Slow Memories' a totally different kind of song is presented. The 'Moon Safari' atmosphere and sounds of Air come by, while the singing is filled with the lightness Art Garfunkel lays in his voice in his most beloved songs.

Like in my review of 'Future Trail' I could point to all the small details that come by. Yes, there is a lot to discover on Thumb World as well. It can be called a trait of Pictish Trail by now. Johnny Lynch does not rest till all the ideas that work are put into a song. To wonder, to admire and sometimes to shudder. It is a rich musical work, without losing the songs. And when 'Bad Algebra' totally goes off the rails like a 1967 psychedelic experiment gone bad could have, it is something I can live with, within this context, because the next song will come. Derailing is not the goal of Thumb World, only a means to an effect.

Thumb World is an album to discover and Pictish Trail "a band" to follow with interest. Something to look forward to in the future.

You can listen to and buy Thumb World here: