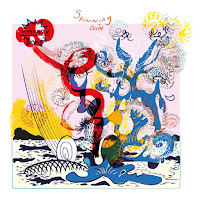 Anyone starting the second album by Scottish band Spinning Coin will need some stamina. 'Avenue Of Springs' starts hesitatingly but enticing. Until a singer sets in with a wavering, sort of not deep enough Lou Reed kind of voice. The chorus of ah ah ahs is a sort of chaos of male and female voices. Where is Hyacinth going?, you might ask yourself.

When second song 'Feel You More Than World Right Now' derails almost immediately when the singer can't hold his vocal melody in check while trying to do a Belle & Sebastian, for some the album could be over. The over-exiting vocal melody following the beautiful B&S kind of intro, is more than I can take, if the song wasn't so nice underneath it. My ears hurt here and there.

Turning away from Hyacinth would be a mistake though. The singer finds his own voice between Reed and Stuart Murdoch in the third song 'Get High' and from that moment onwards the "breathless rush of glorious guitar pop" the bio promises starts to shine through not just in the music.

The secret of the voices is that the band has three lead vocalists. Sean Armstrong has the more warbling voice, Jack Mellin the deeper one and Rachel Taylor obviously the female one. Finally there's drummer Chris White. With two members living in Berlin and two in Glasgow, the band has not made it easy on itself.

The result is an intriguing and interesting album. Recorded in just two days in France during a summer tour, Hyacinth is a amalgam of pop influences from the last two decades. With little lines back to the 80s and even 60s. Jangly 60s and 80s vocals can mix with Johnny Marr's The Smith's era jangly guitars all covered by a Belle & Sebastian icing on Hyacinth's cake. Armstrong again flies over every rail in 'Ghosting', but the song is strong enough to hold its own. With an ever stronger sound with a harsh, mysterious metallic edge filling up the spectrum.

Spinning Coin is able to give its songs a little extra in the arrangement, leaving bits and piece to discover in each new spin. The arrangements, though nothing flashy, hold surprises showing the band had time left for details while recording in just two days.

When in 'Black Cat' a little The Velvet Underground & Nico influence steps in with the innocent girl like vocal of Taylor Hyacinth wins another point for the home squad. Nice, delicate yet forceful in its own way. 'Black Cat' shows another side of the band that is continued in 'Soul Trader'. More jangly, with a harmonica as an extra, but also vulnerable.

Spinning Coin, one of those useless skills like skidding pebbles over water, is a band that I'm glad to have discovered. On its second album, I have one to discover!, the band ties together a lot I like in the music of the past 55 years. in a way that sounds familiar yet extremely fresh. Hyacinth is an album I expect to have a lot of fun with.

You can listen to and buy Hyacinth here: