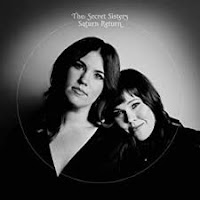 Two sisters singing in a heavenly way together and slightly teasing each other on stage in a way that is certainly funny, if surprising at first, return with a new album. 'You Don't Own Me Anymore' (2017) certainly was a nice album. With Saturn Return the sisters double the stakes, if not more, and leave me sort of breathless.

Laura and Lydia Rogers who form The Secret Sisters returned to the producing team of Brandi Carlile, Phil and Tim Hanseroth, to record in the home studio of Carlile. And how!

"Look upon your mother and the silver in her hair". It is only the very first word, look, that is sung hesitatingly by one of the two sisters. There's no music, just these voices and a spaciousness around them as if the whole St. Peter's dome is at their disposal. If this is not enough to make you melt for The Secret Sisters, it may be nothing will. On second 18 the band kicks in, with a firm country tinged sound. It is the direct line with the previous album as that is severed musically more and more when Saturn Returns progresses.

The Secret Sisters may go for a more commercial sound as pop music in the classical way of decades ago is the driving force of Saturn Return. It fits the sisters like a glove. But not before I sing the praises of 'Silver', the opening song. What a dream of an album opener. It sparkles and bubbles, is filled with the joy of songwriting, of playing and most of all of singing. Laura and Lydia bounce on and off each other creating a cascade of vocals that seem to come from everywhere and envelope and capture me totally.

With the second song the radical bend is taken immediately. The beautiful ballad 'Late Bloomer' reminds me of ballads from the 70s like 'Lydia' (coincidence?), 'Without You', Christopher Cross' first hit singles and a Carly Simon hit like 'Jesse'. A piano is the driving instrument and the dual vocal harmonies are mostly missing. The song is serious but totally convincing.

With 'Cabin' the album goes one step deeper. From an empty song driven by an acoustic guitar, piano and two voices, the song slowly is flashed out more and more, with a fiery guitar solo and all. Country music is nowhere in sight on 'Cabin'. And I'm quite happy, as the level of musicianship and songwriting is at a high level here.

The exuberance of several songs on 'You Don't Know Me' has been replaced by a more serious mood often a bit down cast. That results in a song like 'Tin Can Angel', so delicate, so fragile, so beautiful. It holds a guitar solo, but in a way it is only an intrusion of what this song is really about, the voices of The Secret Sisters bewailing and beseeching heaven, earth and everything that may be in between to send down that angel.

Saturn Return is a giant leap as far as I'm concerned. It holds a depth, musically and in feeling, that is hard to stare into. But when I close my eyes all I have to do is listen and let The Secret Sisters and their entourage lead me around. From that moment onward the album unfolds itself in its full glory. It is mesmerising and addictive, but above all extremely beautiful.

You can listen to and buy Saturn Return here: