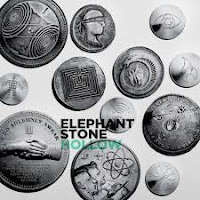 Eight years ago today this blog was announced. Happy birthday to ourselves and you,our readers. Here comes post #2973.

Come 2020 the Canadian band Elephant Stone can be called a veteran of this blog. That its new album makes it to these pages, should not come as a surprise.

Elephant Stone started in 2009 in Canada after frontman Rishi Dhir left a band called The High Dials. In the music the 60s psychedelic music mixed with Indian influences and instruments. Hollow is the band's fifth album. It was the second that attracted my attention first, 'Elephant Stone' from 2013. I seem to have missed an album in 2016. But not a live show in Paradiso a few years back, where the band played a very nice show in the small hall of the former church in Amsterdam.

Come 2020, the band has not strayed from its foundation. Psychedelic sounds move into the pop realm that Elephant Stone commands with ease. So many songs flow so easily, so unhindered by obstacles other bands are hindered by. Whether a Rickenbacker 12 string sounds out, getting mixed with a pedal steel where the soft voiced vocals meander around or the psych sound is more one dimensional, the result is a sound impossible for a trio to recreate live. Although most songs are unobtrusive, they are simply so nice.

'We Cry For Harmonia' is a song that I would guess all bands active in this niche of pop/rock music would die for to have written. Somehow everything Elephant Stone stands for comes together with such an ease, that perhaps months of work went into shaping the song as we get to hear it.

The Dutch band PAUW is inactive already for years, but some of the songs I'm hearing right now remind me of its album 'Macrocosm Microcosm' from 2015 immediately. From there of course the source of all music of this kind can't escape mentioning. The Beatles are all over Hollow. The influence of George Harrison and 1966-67 is stamped on Hollow. I am sure no one at the time would have expected influences would last this long, but they have. 50 and some years later it sparks the imagination of extremely gifted songwriters like Rishi Dhir, producing a beautiful album like Hollow.

When searching for a downside to Hollow I can find only one. Playing the whole album in one go, I notice that the sound of the album as a whole seems a bit flat. It all remains just a little in the same tempo, the same sound. While at the same time the individual songs are more than o.k. The solution here is to start the album at different points. ('The Clampdown' does upset this observation a little, you might say. Yes, parts of this very flashed out song certainly do.)

Elephant Stone already was one of my favourite psych pop/rock bands. With Hollow the band consolidated this position with ease. Let's see if The Black Angels can come up with a nice album as well soon.)

You can listen to and buy Hollow here: