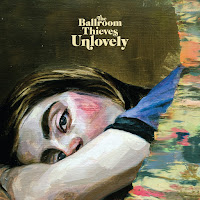 At this point in time I cannot imagine any more why I hesitated in writing on Unlovely. The album is everything but that. It is seldom that an album has sparkled in many different ways and tied different eras in music together in an exuberant way without forgetting earth's valley of tears now and then. An album where singing is singing with all that you have. Even at the moments when the mood calls for holding back.

The Ballroom Thieves is a trio entering on the release of its third full length album. Singer, bassist and cellist Calin Peters, singer/guitarist Martin Earley and singer/percussionist Devin Mauch. With collaborator Ariel Bernstein performing extra duties. Producer Jerry Streeter will have added to the expansion of the trio's sound. As there are strings, keyboards, horns, a harp to be heard, all adorning the songs on Unlovely in a nice and often beautiful way.

What surprised me when starting to listen to The Ballroom Thieves newest album and, frankly still does, is the difference in sound and genre on Unlovely. Something that in the end truly won me over. The album opens with a gospel light (i.e. minus a choir), moves into folk, a ballad and can come up with a harsh alternative rock sound or a Jimi Hendrix 'Voodoo Chile (Slight Return)' intro to another rock song with a beautiful electric piano. It simply all comes by and it all convinces.

The alternated male - female singing brings even more colour to the album. If I'm forced to chose, I'd prefer Peters' voice but when Earley sings lead the background vocals become even better. Both are blessed with a good voice that is pleasant to listen to.

The diversity makes it hard to compare The Ballroom Thieves. Simply because so many different avenues in music are traversed by the band. In the end it doesn't matter. The Ballroom Thieves is a force in its own right and an extremely nice addition to my record collection. Another one of the true listening tips released already in 2020.