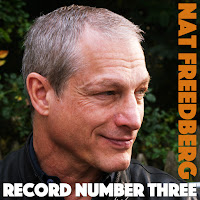 On Record Number Three Freedberg shows another side of himself. The rock beast has been laid to rest for a while. A slightly more mellow side is allowed to come forward. Even a little country in the duet 'One Bad Decision' with Hailey Thompson King. The result is that his voice, one with a very own character, sounds a little more relaxed. There's no rush, no hurry and that is reflected in the singing.

Record Number Three is an extremely varied album with songs people with different tastes in music will like. He's not afraid to show to show some 'Exile On Main Street' era Stones guitar work like in 'Lonely Mile', folk in 'Play With The Devil' or some soulful background vocals in 'Maybe I'm A Tad Blasé'. All this makes Freedberg's new album less urgent than the two previous ones, but certainly not less listenable. #3 is an album to settle in to. Just put it on and let it become a part of you for 13 songs.

I think I've wrote this before. If so it just stands. I am convinced that Nat Freedberg knows he's not the best songwriter and certainly not the best singer. With those limitations in mind he goes to work and shares with the world his very best efforts. Because that is exactly what can be found on this record. Extremely competent songs that are just so pleasant to listen to.

The songs are mostly elementary, drums, bass, guitar and then start listening what happens on that guitar. Every note is well thought out and adorns the songs with a touch of beauty. Again nothing extremely flashy, but everything a song needs to make it stand out. Something with limitations and mastery.

Of the three records I have to say I like the Freeloader album the best. This one certainly battles with 'Better Late Than Never' for second place. Another side to Nat Freedberg? I can't help wondering what will come next.

You can listen to and buy Record Number Three here: