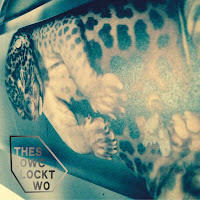 The Slow Clock One passed me by, the second iteration of this project hasn't. Earlier in the year I reviewed Chinup's latest effort, 'Shine Bright Like A Diamond' (read here: http://wonomagazine.blogspot.nl/2017/05/shine-bright-like-diamond-chinup.html.) and received an invite to listen to this album as well.

The Slow Clock is another project of singer/guitarist Harmen Kuiper and a totally different beast than his work with Chinup. Experimental, electronic beats and all. Don't be surprised however when Gruppo Sportivo comes by, in an ever so modern form. The Slow Clock is not afraid of throwing an odd ball here and there, setting its listeners on the wrong foot every once in a while.

Despite the fact that this music is a few steps away from what I usually listen to, I find that the album has a keen ear for melodies. In the mostly (ultra) short song, 2.30 minutes is an exception, Kuiper works out a modest idea. It reminds me of the Philadelphia based duo Carol Cleveland Sings, despite the fact it develops its song more (read here: http://wonomagazine.blogspot.nl/2016/11/effervescent-lure-carol-cleveland-sings.html). The Slow Clock uses electronics in the same way and has that upbeat feeling hidden in its music. A seemingly surprising outlook on what it is singing about. Nowhere the comparison is stronger as in 'Attack And Defend'. And yes, early Zappa is in there as well, like Gruppo Sportivo, but hey, didn't that band cover 'Take Your Clothes Off When You Dance' in its intro to 'Superman'? Circles are round it seems.

In a way it is a shame some of the songs on Two do not get a fuller life in hi fi versions. Several deserve it certainly. A small little pop song like 'Turning Up The Crank Handle' has a nice melody and a hook that catches me. It has a 60s feel without copying anything.

It's not allowed to look a given horse in the mouth. Still it is a shame that the album does not have a clearer sound. It is truly lo-fi in sound like the music reaches me through a muffler. There's no sheen in sight on The Slow Clock Two. This is a shame, because it would have been even better with it.

There is an eleventh "song" on the album. One that does last longer. 13.20 minutes to be exact. 'Don't You Wanna Join That Number' it is called. A Zappa title if I ever heard one. The answer is still no. Like I always skip the last two songs on 'Freak Out'. 'Don't You Wanna Join That Number' is a sound experiment. I have no taste for it, but if you do, be my guest and do join in.

For me The Slow Clock Two ends with its 10th song 'The Lame Duck' that starts with the friendly words "You were redundant". No matter how unfriendly it sounds, it does give the sung to person the sound piece of advice to get rid of bad luck. 'The Lame Duck' is another of these hidden gems on the album. Harmen Kuiper is proving to be a songwriter that I intend to follow. Lo-fi or not, with The Slow Clock Two he has surprised me a second time in one year. I don't mind being surprised some more in the near future, whether by Chinup or The Slow Clock.

You can listen to The Slow Clock Two and download it for free here: