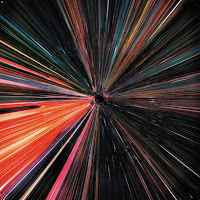 Mirage is Mister & Mississippi's third album and the third album that makes it to these pages. After its self-titled debut in 2013 'We Only Part To Meet Again' was released in 2015. Although I reviewed the album favourably, after a while I did get the impression that I had heard enough of the band as it stood there and then. Does Mirage bring the change that I thought was necessary and if so do I like it?

Right from the opening song 'Wolfpack' it is clear that the new folk sort of music M&M used to play was left behind for a more electronic and rhythmic sort of pop music. An 80s sort of doom feel lies over the album, with lead synth lines as could be found on albums from Howard Jones and China Crisis. The kind of songs that brought the doom that was de rigeur in the mid 80s together with a pop feel. M&M does the same thing, to which it adds something of itself: the ability to tap into a more modern pop than existed at the time and translate both influences into a retro-modern sound.

This leads to a couple of great opening songs that nestle themselves simply among the best the band has delivered so far. 'Wolf Pack', 'Lush Looms' and 'The Repetition Of Being Alone' are great tracks in which Mister & Mississippi put themselves down as a modern band with abundant drive and ambition to change and better itself. There's no joy insight though. I can imagine that being present in the rehearsal and recording studio when these feats were pulled of. It does not translate into the feel of the music. Doom and gloom in abudant supply.

The 60s enter in the title song. Maxime Barlag sounds like a Nancy Sinatra and other singers of that age. Girlish and dreamy, as if they are far away. The music is a different cookie. Sharp as a knife creating a stark contrast between the two.

When some mystery is added to the whole Mirage becomes even more than two dimensional. 'Pulsar' may use some well known building blocks from electronic songs from the past, it sort of glows in the dark. The mysterious sound and subdued singing create a vibe that is just great to listen to.

With that lesson learned I have found the focal point of Mirage. Many familiar sounding parts from mainly 80s songs and sounds have been incorporated into the new M&M sound. The departure point for the album must have been to reinvent the band and its sound. As I wrote before on these pages, I have heard enough new folk in the 10s to last me a life time. Undoubtedly very good albums excepted. M&M went in and came out afresh. The doom side of things becomes the band well and fits the voice of Berlag for over 90%. The pop element makes it all bearable and even an adventure to listen to. Just listen to 'Interstellar Love, Part 1' where an Alt-J electronic, instrumental sequence strengthens the song and adding some more mystery. When 'Part II' starts with a strong beat followed by singing with long held notes and patches of synths smeared out over the mix, the contrast is again great and so interesting.

Summing up, Mister & Mississippi has reinvented itself and has come up with its best album to date. I have only one question left. I honestly don't know whether I will ever really warm to this cold and distant album. Now I've always been fascinated by stars and planets, so we're off to a great start Mirage and I.

You can listen to Mirage here: