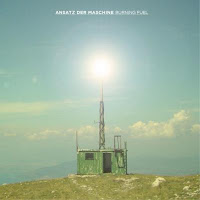 Was ist in eine Nahme? Is that correct German? I notice I don't know for sure anymore. When this cd was dropped in my mailbox and I read the band name, I have to say that I expected anything but what I've heard several times since that moment. Ansatz Der Maschine? Industrial rock? Krautrock? New Neue Deutsche Welle, from Belgium? Anything but the dreampop touching on triphop I'm listening to.

Ansatz Der Maschine is the vehicle of Belgian, more precise, West-Flanders, musician Matthijs Bertel. This is the first album that he releases under this name since 2012 and the fourth in total. Tattooed Body Blues is totally in sign of the times. Dreamy, escapism, far from the madding crowd. This album deals in atmospherics. As such it comes close to a Dutch band like Maggie Brown, most so in 'Insomnia' and Belgian band The LVE. The song that comes closest to indiepop. There's also a Lily & Madeleine or First Aid Kit connection because of the many female vocalists on the album. Just listen to 'Song X' to know what I mean. It is the electronica and soft beats that make it all different though.

Bertel is responsible for large chunks of this album. Most of the music is played by him, the lyrics with one exception are his, background voices are his. On top of this he brings in different lead singers, a drummer and specific instruments like a cello, horn, guitarists, a harp, etc. Keyboards and electronics are the basis of Tattooed Body Blues. Over that basis the guests do their thing, that give a song its definite feel. That basis becomes the song in the instrumentals, e.g. 'Cold' and final song 'Highlands'. Here Bertel shows himself in his full, dreamy glory. Like a modern day Jean Michel Jarre.

Tattooed Body Blues is an ideal album for the Sunday morning, after breakfast with the Saturday newspaper on the coach. An ultimate relaxing moment. But that is not the whole of the story. The second one is that it is a great album to listen to with a headset on and just listen to all the sounds and the way they are interwoven. Another great way to relax. This works as well when I turn the volume up while playing this record. The whole production comes alive instantly.

In the songs with vocals my mind brings me straight to Massive Attack, although I could mention Portishead as well. The vocal music of Ansatz Der Maschine seems to lack the, hints at, beats, while the atmospherics certainly are similar. The slow, accented beats are there, but somehow I seem to forget about them even while listening to the singing, which is all so dreamy. When the beats do appear up front, like in 'Highlands', Bertel provides them with much more of an own signature. Scratching sounds are mixed with all sorts of electronic bleeps and hiccups. In the traditional songs Matthijs Bertel is much more conservative than in his instrumentals, which is where he comes from or so I understand. The exception here is the first single 'Burning Fuel', where the two worlds really get together. Despite that he used different singers for all songs, when the album is finished I have the impression to have listened to one singer, with the notable male exception in 'Insomnia'. This has to do with the dreamy quality of those songs.

Before summing up, I have to compliment the choice of photo on the cover. Sheer beauty Leen Verstraeten captured there.

Tattooed Body Blues is an album with two faces. Instrumentals that tend towards soft dance tracks with a lot of melody over the beats and dreampop of a high quality in which different singers excel. Ansatz Der Maschine, and it does on this album, leaves a lot to discover in the songs. Different layers slowly present themselves with each spin. An album to truly like.

You can listen to 'Burning Fuel' here: