Person A. Edward Sharpe and the Magnetic Zeros 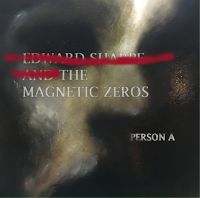 Edward Sharpe and friends have featured several times on this blog. His first album, 'Up From Below', had passed me by, but the inescapable 'Home', that featured in some commercial or other, did not. Person A is after, 'Here' and 'Edward Sharpe and the Magnetic Zeros', the third album that receives a review on these pages. The first one without co-singer Jade Castrinos.

Edward Sharpe and the Magnetic Zeroes was a member of the 'hey ho' kind of groups or neo-folkies as the world calls them. With Person A the band moves away from this idiom into a far wider environment. There is still a hint or two in the chord changes of a trumpet, but for the rest? Person A is far more experimental, jazzy even and spacious. There's so much going on that I nearly failed to hear it at the first listenening sessions. No review in sight back then. This changed for the simple reason that I started to discover these layers in an at first empty, seeming album.

On Person A the range of influences let into the music go far beyond folk. I even dare to call on negro spirituals in combination with 'Jesus Christ Superstar'. Under the electronic layers of 'Uncomfortable' or 'Wake Up To The Sun', there's no denying here.

At the same time this album is so much smaller than what went before. The music is so much smaller, as if instruments are on probation. Edward Sharpe is not afraid to strip a song down and lets Alex Elbert sing with his highish, electronically treated voice and do a lot of the work in a song.

It is when the fourth song starts, 'No Love Like Yours', I notice the sharp contrast with the three songs before that. This is the first song that has some of the exuberance I associate with this band. And still it is modest here.

Surprises are on offer in 'Wake Up To The Sun'. The bare beginning is countered with a full ending, with lots of copper ringing out, blowing up the songs in a great and impressive way. The contrast with 'Free Stuff' is large again. The beginning again bare. The magic creeps in though in the form of a counter vocal melody and horns. It all ends too soon. There might have been more I keep thinking. 'Free Stuff' is a beautiful song.

There are more songs like this on Person A. I found that Edward Sharpe c.s. made me work harder to discover them. Does this make Person A a special record? That I'm still deciding on. I'm not certain yet at this point in time. I have gone from disappointed, to interested to intrigued. One step left to go: convinced. That phase may just be around the corner. Time will tell.

What I do know that Edward Sharpe and the Magnetic Zeros have stepped out of its comfort zone and experimented with its sound. This resulted in an album that goes beyond what I expected from the band. Influences all the way back to 50s crooning can be heard. It opened up to a wider musical universe. Time to stop reading and start listening.

You can listen to 'No Love Like Yours' here: