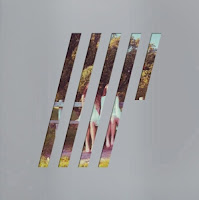 Not many prog rock albums make it to these pages. For a simple reason: I am not a fan of this sort of music. Often I find it too difficult and it tends to all sort of sounding the same. There are exceptions. For some reason I like Flying Colors a lot. While they totally qualify as a progrock band, still I like most of its songs. And now there's 4 1/2.

Steven Wilson is an artist with a gigantic output under different names, although in the past years he has released mostly under his own name as a solo artist. Most renowned is Porcupine Tree, a progrock band that Wilson was active in since 1991.

Although I have listened to some of his solo albums of the past five years, there wasn't a single one that I wanted to return to. I did with 4 1/2 and just don't ask me why. Perhaps it started with the opening riff of the album. Neil Young 100%. I wanted to start singing "Be on my side and I'll be on your side", when 'My Book Of Regrets' took a different turn. The guitar part from 'Down By The River' returns later on, but in the meantime a whole playbook of progrock is opened No cliché is shunned, including a Pink Floyd mid 70s sequence. And I start listening again.

The dreamy 'Year Of The Plague' reminds me of Pink Floyd again. Instrumental all atmosphere hardly a song structure in sight. It just floats around the room. 'Happiness III' has a great vocal melody. Wilson rocks out, being driven onwards by a hard hitting drummer. While the warm Hammond sound and piano give of a feeling like a luxurious bath, 'Happiness III' gets very direct and almost poppy as well. The chorus is so strong that it could have been a hit single in another era.

My attention starts slipping some in the long intro of 'Sunday Rain Sets In'. It is as lazy as a Sunday can be though. So the mood is set just right. The change that sets in is as prog rock as things come. UK, Brand X and all that bands that were so trending around 1979 come to memory and I remember exactly why I have hardly ever listened to those jazz-prog-rocking albums since: in the end this music does not touch me emotionally. All prowess, no feeling. In 'Vermillioncore' this mood is deepened, but gets a metal edge and I come back on track. The composition really rocks out. The mood changes into an underwater sequence and I'm lost once again.

It all ends with the Pink Floyd opening of 'Don't Hate Me. There are bits here that I truly like. There are the dreamy vocals of Ninet Tayeb and the solo's on Fender Rhodes piano and saxophone that make 'Don't Hate Me' a very attractive song to listen to. It goes through severe mood changes, but takes the listener by the ear and travel through them all.

The end result of this very serious listen to 4 1/2 is mixed. It is a collection of leftovers and a re-recording. It lacks a central focus, but that may be one of the reasons why I have come back to the album. There are a few (parts of) tracks I like. So, here's another foray into a progrock album by

You can listen to 'Vermillioncore' here: