Always a very hard task, putting stripes through albums that I like, enjoyed, even truly like, to come up with a top 10 of the year. At the moment I'm starting this intro, I still have six albums to ditch. It would even have been harder if these four albums, that I've discovered this year, hadn't been released in 2011. All four I've played a lot in 2012. The 'Mannequins' EP by Monster Cat, the Singapore band that I've sadly missed as they played one Dutch show early autumn, where I really could not go to. 'Violeta, Violeta, vol. 2' by Kaizers Orchestra, a true rival for topping 'Maestro' as its best album. 'When the dust settles' by The Parlor Soldiers, this true roots album of great beauty and singer-songwriter Stephanie Fagan's 'Heart thief', that I like so much. All these albums do not qualify for this top 10, but I truly enjoyed playing them this year.

2012 Is not an outstanding year. I haven't heard a 'Dark side of the moon' or 'Searching for the young soul rebels', but perhaps that is unattainable at my age. But then, no 'Suck it and see' either. Having said that, there were some albums that really stood out. Most albums have been reviewed on the blog. If you like to read the review (again) links are provided. If something stands out it's that four different acts from Holland have found their way into my end of year list. A record, I'm sure. With the UK represented in the same way and two US acts.

The song of the year goes to 'Chevy thunder'. So much fun and Spector's album 'Enjoy it while it lasts', only barely did not make this top 10. The same goes for 'Violeta, violeta, vol. 3' by Kaizers Orchestra which will be reviewed on the blog soon. And then there is Jake Bugg. This cd really deserves a spot in this list, but I do not know which one to kick out. If any, then it has to be 'Flying Colors' as symfo is not really my music, but the album really deserves this spot. So I decided to cheat as you'll find out, by putting something old and something very new together in one spot.

10. Coexist. The xx
"Quiet desperation is the English way" is a line that popped into my mind starting this mini review of Coexist. The dark, brooding album is majestic in its silences, in the music which isn't there, but perhaps could have been. The xx are on a plain of its own. I am truly curious where this album will lead the band to.

9. 10. Case Mayfield
This album was a surprise to me, as I didn't really like Mayfield's first album of 2012. 10 I like all the more. It has a great combination of more up-tempo songs and ballads, louder numbers and small songs, bare to the core. But all are of a high quality that makes 10 stand out.

8. Flying Colors. Flying Colors
A symfo album in my 2012 list? Yes, I've played this album an awful lot in 2012, so it deserves a spot in this list. From opener 'Blue ocean' all the way to the end, pleasant things are happening on this album, where some veterans of the symfo and hard rock scene are playing together with obvious fun. Fun that struck a cord with me. So yes, symfo in my 2012 year list.

7. Heart in a mason jar. Alex Culbreth & the Dead Country Singers
Alex Culbreth had already taken me in with The Parlor Soldiers this year. In the final weeks of 2012 he packed me in again with Heart in a mason jar. This fine roots rock/country (rock) album, is of the finest quality, without any extras. What you hear is what you get. The album is recorded, not produced in other words. Mr. Culbreth has a fan. Looking forward to hear him play over here in 2013?

6. Heavy flowers. Blaudzun
A big surprise for this year was Heavy flowers by Johannes Sigmond, better know these days as Blaudzun. This fine, complex and multi-layered album just grew and grew for me all through 2012 and ends up on my year list. Varied, serious and playful, bordering on classical music in a serious pop way. Just all good.

5.b Jake Bugg. Jake Bugg
A new star on the horizon. Confident as Alex Turner,  as real as the young Bob and drinking and smoking like there is no tomorrow. Jake Bugg gives his all at 18 to us and that is a lot. From tearjerkers, to fired up blues rock in the best 'Subterranean homesick blues' tradition, Jake Bugg has it all down.

5.a Sunken condos. Donald Fagen
Something new, something old. A great new album by Steely Dan's Donald Fagen. This bluesy, jazzy album shows all that he is capable of when in his best form. At the basis simple songs -or so they seem- are played in intricate layered arrangements which make Sunken condos so much fun to listen to. A gem of an album.

4. Springlevend. The Kik
60s pop played and recorded with somewhat more modern gear. This follow up to Rotterdam's garage rockers The Madd, are one tat more commercial and got a lot of people singing 'Simone' in 2012. Springlevend ('Alive') is filled to the brim with heart rendering, fun and playful pop songs that just beg to be sang along to.

3. I, II, III. Sunday Sun
This new Dutch band delivered three EPs in just a few weeks, that each hold great songs of various influences and great pop. The harmonies are meticulous, inventive and delivered with great pride and joy. Sunday Sun deserves to be heard by a large audience.

2. Django Django. Django Django
The album that surprised me most in 2012. Django Django manages to deliver weird rhythms, song structures, cut ups and still come up with strong melodic songs that latched themselves under my skull. Serious and fun at the same time and full of aural candy. 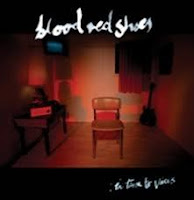 1. In time to voices. Blood Red Shoes
When all was said and done, this album came out on top. Laura-Mary Carter and Steven Ansell have found their strut and blend their music and singing really well. Some songs went through me like a knife through butter. It's punky, there's attitude and energy galore and some really good melodies to match all that. There's a certain longing in Laura-Mary's voice that keeps me listening to her. Simply the best album of 2012, by far.