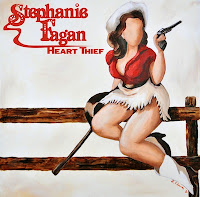 Recently we published a review of Stephanie Fagan's latest album 'Heart thief' (click here). It sounded like there was a story behind it, so we reached out and contacted Stephanie Fagan and asked if she would like to do an interview. She did. You can read the result here. It even went one step further. We also got into contact with her producer, Missy Davis Jones. An interview with her will follow later this month. But first this.


As not all readers will know Stephanie Fagan, would you like to introduce yourself?
I’m just a normal American married woman in my mid-twenties. My husband is in the military so we move all the time. Songwriting is something I can do anytime any place. I love it. Ive been writing songs for about 10 years now.

Which musicians are/were of influence to your music?
Gosh , too many to ever name.  I’m a real lyrics snob. So I like death cab for cutie, the Decemberists, the indigo girls, Noah and the whale, Dolly Parton, John Denver, Elvis Costello, Jim Croce, Sondre Lerche, anybody with excellently crafted lyrics.

If you were allowed to bring one album with you to the proverbial deserted island in the Pacific, which would it be and why?
I mixed one I made probably, BUT if I were forced to pick just one artist and one album I’d say The Black Keys “The Rubber Factory”…. It’s just really sexy.

In your bio it says that you have travelled a lot. What made the road appeal to you?
The road didn’t so much appeal to me as it was between me and where I wanted to go. Haha. I mean traveling is fun but it’s exhausting. I like to sleep and stay home so just thinking about being on the road makes me tired. When you’re playing music you have to travel, it’s just the way it is. I was always afraid to travel on my own to places I'd never been where I knew no one and had no place to stay but I learned quickly how generous and kind people can be. Everywhere I went people offered me a couch or a meal and people really listened to my songs and just were so great to me. It made me less afraid of the world.

In what way did the travelling and playing help develop your music?
I guess once I left the comfort of the small town I grew up in I learned how similar people really are. It was amazing to be hundreds or even thousands of miles away from home and talk to a stranger who felt the same way I did about being dumped, or angry or homesick. It’s so wonderful how for all our differences people I think are fundamentally the same. We all want to be loved and appreciated, we’re all selfish and at times horrible, but nobody is all bad either. It made me less self conscious. Before I would write personal things and feel embarrassed like I was telling a dark secret about myself but really everybody has the same unflattering secrets. Nobody’s perfect so now I’m less embarrassed and write more honestly.

Heart thief is very clear sounding. What was the influence of the producer of 'Heart thief', Missy Davis Jones, on the sound of the album?
The sound of the record had a lot to do with Missy’s vision. I always say “I have no imagination” when it comes to instrumentation and arrangement. She’s good with that stuff. She’d say “how about horns here or strings here?”  She really fleshed things out and made it sound polished. The sound engineer was her husband Ken “Dakota” Jones. So they worked together on things. I don’t pretend to be a producer, I’m just a singer/songwriter so it’s hard for me to imagine my little songs any bigger than me playing them on my bed at home.

How did you meet Missy and when did you know that you would work together?
Its complete happenstance we met. I was working at a coffee shop peddling a CD I had made and started talking to Ken when he came in for coffee. A few weeks after we met he asked me to do some computer work for him. At the time I thought it was strange but wasn’t in a position to turn down work. So I went to his house and started doing odd jobs for him and his wife Missy. I instantly hit it off with them. They are really easy going and had just moved to the area. I knew them for years and then Missy started a record label and Ken opened a recording studio and it was just a natural progression that I would be the new artist. Kismet.

The songs on your album have a few distinctive styles, from singer-songwriter and country to blues. Were the songs created that way or do they develop along the way?
They became more distinct in the studio. I came in with the basic chords and tune but everything else was added later.

The sound of 'Heart thief' is diverse. There are many different lead instruments. How did you decide what fits a song best?
Haha The simple answer is that I don’t. Like I said, arrangement is more Missy’s thing. A lot of time we will have 3 or 4 instruments and we pick the one that fits the best and pull it to the front so to speak.

Most of your songs are what I would call “bittersweet”. At the same time you can write about a happy feeling or event. From where this contrast?
It all depends on where I’m at mentally when I’m writing it. Most of the songs on Heart Thief were written at the end of what I deemed my “wild year” . I was done with college. I had been fired from my job. I hadn’t met my husband yet. I was just completely lost. Dating a string of guys that weren’t right for me. Destitute. Moving from one friend’s house to the next every few months and traveling around playing music sleeping in my car. When I’m more settled I tend to write sweeter happier songs.

I read that you’re living in Germany these days. Can we expect lederhosen music next? (Is living in Germany influencing your writing in a different way than the south of the US?)
Ah yes I lived in Germany for about 2 years I’m actually in the process of moving back to the States right now. I don’t know exactly how it influenced me. I won’t know for a while probably. I really enjoyed listening to the street performers over there. Making a lot of sound with one or two instruments. Also I loved the ambient noises. The river, the cobble stone, the echo inside of a cathedral, it was all wonderful.

In ‘Writer’s block’ you sing “This song, like all the others, is about you”. How important is your everyday life to your lyrics?
Heart Thief was a record written primarily to or about this one guy. He didn’t like me and it broke my heart so bad I just mourned for a year… or more. Before that I was just writing fictional stories about love and heartbreak but everything changed when it happened to me. It was so much more powerful than I had imagined. The funny thing is he’s probably forgotten me completely and he’ll never hear any of these songs. It’s kind of pathetic but it made me better.

Did you experience a writer’s block and if so what made you come out of it?
Yes absolutely “Writers Block” was written about it. I was so frustrated because I was writing these great songs BUT they were all about this guy I didn’t want to love. I felt like he didn’t deserve songs written about him, and I was mad at myself for not being more in control over my own inspiration.

A theme that comes back in your songs is, I would describe as, “to belong”. How important is this for you?
It’s everything. All I’ve ever wanted is a nice home full of people I love who love me back. My early twenties was just me trying to build that over and over and it never really worked out until I met my guy. He’s good.

‘Prodigal’ really stands out as a song on the album. I described it as ‘Paris, Texas’ with lyrics. How did this song come about?
Ironically it was the song that was the least work on the whole record. I had this song with no music. And my friend John Bazen came in with a dobro. We rehearsed 10 minutes and did 2 takes and that was it. It was simple and we liked it but didn’t know if anyone else would, so the response has been surprising.

In your song 'You are the devil' you sing “You are the angel on my shoulder, you are the devil”. Is this a song about the good and bad that is within every (wo)man?
Yeah kinda of. It’s about loving someone you know is bad. Wanting someone who doesn’t want you and treats you badly. It’s a strange feeling to objectively know someone is bad but to love them like they’re good. To love them even though they don’t deserve it and its killing you. To just lay there and let someone ruin you.

Heart Thief is from 2011. What can we expect from you in the near future?
I’ve been writing a lot. We recorded a little but we’re not sure what it will turn out to be yet, a whole album or maybe a 5 song EP, it’s all wide open. The new songs are happier. I’m in love and my life is really comfortable right now so everything is sweet and mellow.

Are there plans to tour in The Netherlands?
Yes! Nothing in stone yet but it’s definitely at the top of my list. I’ve never been there but I’m really eager to visit.

You can listen to 'Heart thief' (and it is highly recommended that you do so) here. From there you'll find it a small step to order the album directly.
Gepost door Wo. op 10:43