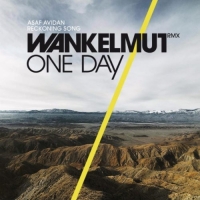 You can listen to One day (Reckoning song) here.

One of the most unlikely hits of 2012 and a number 1 hit in The Netherlands to that, is One day (Reckoning song). Although the hit version is a remix, the unsure sounding harsh voice of singer Asaf Avidal is so at odds with everything associated with hitsingles that I'm totally amazed. What can the attraction to the general public be?

Scoring hits is no longer about sold items as there hardly are cd singles left in record stores. Individual purchases in online music stores like iTunes attribute to counting popularity, as charts do. My best guess is that the power of radio diskjockeys or the format that orders them to play certain songs, may thus have a little more influence than in the old days. If airplay constitutes part of the ranking in the charts, then this definitely is the case. Still someone decided that it was a good idea to start playing One day. I can't help thinking how unlikely this choice was, as the harsh, strange voice, the changing rhythms within the song, the terrible desperation calling out, all spell this is not a radio hit in capitols if not in "chocolate letters" used in news papers for very special occurrences. A question is here did the song rise to popularity first or did the radio cause it? So what can the attraction be?

A hit single from Israel is also uncommon in The Netherlands. We had a few, but mostly related to the Eurovision Songcontest. The song being remixed by a German DJ, Wankelmut, is a nice touch as it shows how far we've come in the past 70 years. Wankelmut, Jacob Dilssner, took the song from 2008 named 'Reckoning song' and gave it a new leash on life as One day. From Germany where the song took the number one position first other countries around Germany were taken by storm resulting in number 1 hits in several countries.

What speaks for the song is its authenticity. There are primal emotions shared here that go beyond an average love song. Heart and mind seem broken, listening to the layers of emotions laid into the voice of Asaf Avidan. However except for one verse, clearly hinting at a recent break up, the song consists of two lines lines only "One day baby we'll be old, think of all the stories that we could have told", if we had still been together that is. By singing these lines in different forms of emotions, Avidan's voice is pushed beyond the breaking point. Two lines make the song easy to sing along with at parties or in discos. The driving beat of the acoustic guitar subtly backed by the soft beats and treated hand claps of Wankelmut appear to do the rest.

There remains one mystery though. Asaf Avidan is a man, as you can clearly see in this video where he performs the song in an acoustic version. Yes, the strange voice is clearly there, but on the Wankelmut version I could have sworn there's a woman singing the song. Even the clip, in a night and a day version, suggests a woman as the blond girl is the centre in both videos. Did Walkelmut tweak the speed of Avidan's voice as well? Whatever the answer, it seems like Asaf Avidan sings here with a trans gender voice if I ever heard one.

Is all this enough to explain the popularity of the song with young and old? I just don't know. All I do know is that the song is engrained into my brain forever as all real hits are, whether I like them or not. One day is a very special song and by all appearances it is clear that this goes for a lot of people around Europe in 2012. So, yes, a hit is explained or so it seems.


You can order One day here