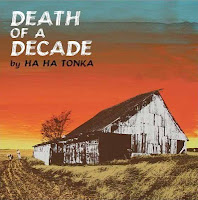 You can listen to 'Usual suspects' here.

And once again the Q-Bus in Leiden managed to present a band that I had never heard of and came home a fan and very curious what the band would sound like on record. Where the show was surprising and with loads of variations in songs, the album just totally does justice to the live performance of the Ha Ha Tonka. Death of a decade holds all the elements, excluding the exceptional four piece a-capella singing the band is just plain sensationally good at.

Listening to Death of a decade my first impression is REM. The band starts off from 'Losing my religion'. The way the mandolin comes to the prominent position in several songs, there's no mistaking this influence. The second influence I hear is Mumford & Sons, although the question could be who came first?, but I'm not familiar with Ha Ha Tonka's previous efforts, 2007's 'Buckle in the bible belt' and 'Novel sounds of the nouveau south (2009), so can't judge on this question. Beyond that a whole bucket of influences come by perhaps starting with the early Jefferson Airplane and The Byrds, e.g. in 'Jesusita' and all that learned from them after.

Having said that, there is more than enough Ha Ha Tonka to justify the comment that the band has its own signature sound. The rough-edged voice of Brain Roberts is the first indicator. The voice is warm and harsh at the same time, with loads of expression which stands out compared to many other bands. The harmonies from high to very low fills several gaps making songs decidedly more interesting than they otherwise would have been.

Another thing that catches the eye immediately is the band name. Not exactly your everyday one. It has nothing to do with Roald Dahl's Willy Wonka, but everything with a statepark in Missouri and is supposed to mean "laughing waters". Do not get fooled by the name, as the band is into some serious music and into finding ways to express itself beyond the obvious. This quest leads to at least 50% of the album being outstanding and the rest certainly above average.

The switching between mandolin and electric guitar as lead instrument gives Ha Ha Tonka also a distinct sound. Although not unique, Brett Anderson's playing is different from most guitarists in a folkrock band. Something which is live more apparent than on Death of a decade as the band rocks out live a bit more in several songs.

And what struck me most is how much the sparkling opening track 'Usual suspects' brought my favourite Rod Stewart track 'Maggie May' to mind. Not that they are so much alike, but in feel and that is meant as a great compliment. Death of a decade deserves more interest than it has received in The Netherlands so far and as far as I'm concerned far beyond. Ha Ha Tonka may be a band to watch as they convince on stage as well as on record. And as this decade is far from over, take your chance, says,

You can order Death of a decade here