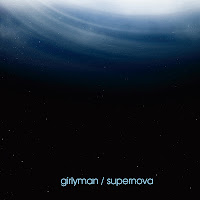 You can listen to 'Nothing left' here.

After the review of the show it's about time to review the latest output by Atalanta, Georgia based close harmony pop group Girlyman. Having been impressed so much by their live performance I'm really curious to familiarise myself with the album, but also slightly hesitant. What if they don't deliver on album? Rest assured, they do! Supernova is full of soft focussed songs, performed meticulously with beautiful close harmony of three voices interweaving in and out of each other.

Supernova is Girlyman's fifth studio album, but the first with JJ Jones on drums. As the band says: "Our sound got bigger and closer to what we had all imagined it to be for years". Don't expect big rock outings. Supernova provides you with the right songs for listening intensely and contently to. Most songs are small, intimate, where the instruments provide the background to the melody. All tracks are songs of the purest kind, like trickling water in a small brook. JJ's drums give them a more pop feel than folk. Like the great hit songs of Simon & Garfunkel. Girlyman may not ever score hits like this famed duo did in their day, but who does with this sort of music these days? All fans of great singing with a keen eye for melody should however check this album out. To not do so is your loss. A great loss.

As a whole Supernova colours neatly between the lines, but this is to be expected. The band strives for perfection in harmonies at which they must work hard to develop. So the last song 'Best I could' comes as a bit of a surprise, as the country feel with fiddle and mandolin sets of against the rest of the album. In as far as possible they even sing a bit loser. The albums opener 'Nothing left' starts off with Nate Borofsky singing solo. Bit by bit you can hear the song unfold, exposing the beauty of the voices of each individually and together, Tylan Greenstein, the deeper and Doris Muramatsu, the higher voice. It's the mould for Supernova as it only gets better from there. Some songs are faster, others slow, some a little harder, others acoustically dressed, but all have those three great voices.

All except drummer JJ provide songs, written solo or in combination. The one singing solo is mostly a give-away here. It's the added sum of their presence that makes the band as they add to each other. Listen how the band takes Nate Borofsky's composition 'Michaelangelo' by the hand, making it one of the signature songs of Supernova. Several songs are on longing (f)or acceptance. Finding your own in a world that may not be so cooperative for someone sticking out for one reason or another. Someone a person that stood out for whatever reason at some stage in his or her life can relate to instantly.

The band is a favourite of the gay community. This may be so, but they're here for all to enjoy. It does not matter who or what are, it's about the quality of the music offered and beauty is offered here in abundance. At the show in the Q-Bus they played my soul strings and perhaps those of my heart as well. As they sing it themselves on this album, they broke me slow. Song by song. Supernova graces this memory totally. Let me say it again: Listen to this album and be touched. Girlyman deserves to grow bigger than they are now and become better known with loads of more fans. Do you need to know more? By this album!

And that fantastic, mesmerising show at the Q-Bus? It's on You Tube. Just click here to find out what you've missed.

You can order Supernova here