Dutch/Belgian week on WoNoBloG: As it ever was. Absynthe Minded 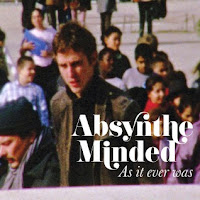 You can listen to 'Space' here.

My introduction to this Belgian band was with their previous album 'Absynthe Minded' from 2009. It is with their new album, As it ever was, that the band has made a real impression on me. Absynthe Minded has produced a perfect blend of pop, indie and alternative that is as good as Blaudzun's magnificent 2012 album Heavy Flowers and almost as playful as Django Django first album (2012). In other words this album goes straight into my list of favorites for this year.

Absynthe Minded is around since 1999 and has scored several hit albums in Belgium, even hit singles. In the Netherlands they are relatively unknown and it is about time this changes. As it ever was is their fifth regular album and entered on the number one spot of the Belgium album chart. In other words, these guys are superstars in their home country. And with music that one can come to their parents' with!

As it ever was is a stylized album. The music is tight and at first instance not very playful and certainly not dangerous. Listening better it becomes apparent that the slight variations in the approach to the songs does wonders for the feel of the album. E.g. the way that 'Picture in a frame' starts off as a jazzy, bluesy silent song built around electric piano chords, is slowly built into the suggestion of a rock anthem without becoming one is very well done. And I love the singing, so under-cooled and mixed almost behind the piano. 'Picture in a frame' is only one of the pearls on this album. Alas for swine, I'm keeping mine.

Does Absynthe Minded fit in with other bands from the "Belpop" wave as I dubbed it somewhere around 1996. Yes, clearly. If you like dEUS, Metal Molly, Sukilove or Millionaire, you will find your own here. But the band has its own spot also. It relies more on melody than effect, also in the somewhat more experimental 'Crosses' with its galloping rhythm and violin. More keyboard than guitar. Bart Ostyn's voice is one of the secrets to Absynthe Minded. Clear, pleasant and instantly recognisable. In his phrasing Ostyn reminds me of Zita Swoon's Stef Kamil Carlens, not in sound. There is no other voice like that.

As it ever was opens with the Sioen like piano sound in 'Space', but incorporated in more melodious music. Some songs remind me of dEUS' lightests songs. On the other end of their spectrum Absynthe Minded infuses a few songs with sounds from a gypsy background, giving a whole different flavour to the album. There are other influences that suggest that the band is also familiar with French songs like 'Tut-tut-tut-tut' or 'Harley Davidson', as 'End of the line' has this same poppy quality. These references are never disturbing as Absynthe Minded is very much its own band.

It's the playfulness of songs like 'Space' and 'As it ever was' that really won me over to this album and make it such a joy to listen to it. A retro sound because of the electric piano of Jan Duthoy, but the songs are definitely of the here and now. The flow into the refrain of 'End of the line' is so much fun, with the violin, played by Renaud Ghilbert, beneath it kidnapping the song into another flow and flavour. These are only the first three songs and each is different from the other. Absynthe Minded manages to keep the album at this level, making it one of the best albums of 2012 so far. I'm afraid I've been absent minded a few times in the past days.

You can order As it ever was here