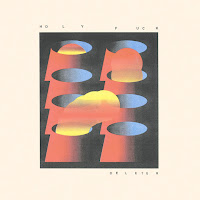 Is Deleter an album aimed at me? Of course not. Holy Fuck plays electronic dance music. Multi-layered synths mix with beats and treated vocals that can fade in and out of the music, just like parts of the music can. It is the beat that continues in different ways. Drums, percussive sounds and a synth played with a repeating of the notes, creating another rhythm. It is a mayhem of different sounds and beats that together create a song that somewhat to my surprise can be quite catchy.

Holy Fuck is not a new band. It is around since 2004 and is releasing its fifth album. Working out of Toronto in Canada, Holy Fuck has burned drummers faster than I have cars in my life. The electronic creatators of the band are the two real constant factors. This is less so for the bass player (and the drummer of course). Brian Borcherdt and Graham Walsh play the keyboards and create all the effects going on. There's someone singing and I may even hear a guitar here and there on Deleter. As I am unfamiliar with the previous work of the band, I can't tell whether these more "earthy" influences are new. If they are, I certainly like them.

It is the part that actually attracts me to Deleter. The band may focus on dance influences, there certainly is a part that makes melodies important, next to a psychedelic part making the music quite spacy and out there. Holy Fuck is not afraid to float its music a little. To make as if it is crawling through the room, instead of the soundwave going for my eardrums directly. Overall the band adds a rock element that gives some of the songs an extra layer of toughness. And yes, in the one song I like the band better than in another, but overall, Holy Fuck surprises me. Simply because this music usually is not for me. Deleter is.

Here I am sitting in a foreign hotel room, with semi crappy earplugs in, wondering what Deleter would sound like at home through the soundsystem. The bass that only comes through when I hold the plugs in tight, would probably lie deep in the mix, creating mayhem when played loud for neighbours and passersby, while I'm moving my head just like I am now. I am totally certain that will not change.

Can I compare Deleter to another album? That questions keeps going round my head, but I have a hard time coming up with names. So the answer is no. You'll have to do with my comments and description. It ought to be enough.