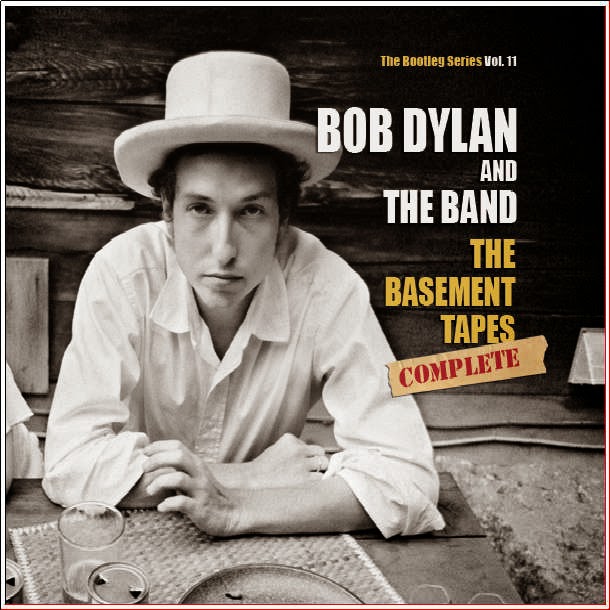 The story by now is well known. Bob Dylan crashed his Triumph motorcycle in the early summer of 1966, was even rumoured to have been killed or fatally wounded, but became a recluse instead. Was married to Sarah Lowdns, had a bunch of children and moved to Woodstock. There in 1967 he began to make music with The Hawks, who were to rename themselves The Band and recorded its debut album in Woodstock, called 'Music from Big Pink', released in 1968.

An enormous bunch of music it was, that Dylan recorded with The Band. Rumoured, often bootlegged, but shelved right after the recording sessions, except for selected sheet music sent to his publisher to be used for other artists. Some hits came from that, e.g. 'Mighty Quinn' by Manfred Mann and 'This wheel's on fire' by Julie Driscoll and a whole bunch of recordings on albums, including 'Music from Big Pink'. The rest was not heard officially until 1975, at the time Dylan had recorded ('Planet waves') and toured with The Band again, as 'The basement tapes, a sensational double album. There was more, much more, still shelved. A little of it surfaced on Dylan's first of his 'The bootleg series, vol. 1-3. 23 Years after that event the world is treated to Vol. 11, as a 2 cd set and as a luxury box, six cds in all.

At the time of writing I still have not listened to all albums. It's just too much. Does that keep me from writing a review? No, far from it. The message that is conveyed on Vol. 11 is clear one and easy to understand. In that basement in Woodstock where the six musicians played music over several months, a small wonder took place. Inspired and relaxed the six waded through a truckload of songs. Dylan was knocking them out as if they were fruit ripened on the tree. The recordings are mostly simple. Two mics capturing all happening at the same time. Some sound worse than others. Others are just snippets of songs that never turned into something final. Some the band got back to and tried another shot at it. Obvious growth coming from it. There's a bunch of covers, like e.g. Johnny Cash's 'Fulsom prison' and Tim Hardin's 'If I were a carpenter' and cracks at many traditionals. A wide collection of songs, enough to fill six cds and 139 tracks in total if I added all up correctly.

Vol. 11 is more of an historic monument than a current album of course. An album collection for the fan that wants to have everything by Bob Dylan in the home. What is on display here is only there because of that fact, it was never meant to be released. The question remains, were the songs found not good enough? Or left behind because both wanted to move on? Coincidental remnants of musical fun? Being a Dylan fan, I'm glad to be listening to this set of music. Whether I will return to it, like I did with Vol. 1-3, which became my musical bible for a while at the time, I strongly doubt.

Another interesting question is, who set who on what path? Fact is that The Band made a career out of this sort of American music. In those days they were mostly a band that performed backing others, including Dylan. At the brink of its own career. Fact is The Band laid the bridge across the great divide. Linking more modern beat of pop music, as anything with long hair was called at the time, with more traditional American music. Dylan came back with a totally different album than 'Blonde on blonde'. 'John Wesley Harding' was a strict, bible driven, serious and rather bare album. An album so different that, without knowing about the basement sessions, must have been incomprehensible to fans at the time, so I can imagine. Dylan wrote nearly all of the originals, but what was the role of The Band? They are playing the songs, colouring them in. The warm organ sound of either Richard Manuel of Garth Hudson, makes so much difference in the way these songs would have sounded otherwise. And what about that unique set of voices? Looking at the tracklist, Dylan is in the driver's seat. Although of course there were a few odd collaborations and not the least songs on this set. 'Tears of rage' with Richard Manuel and 'This wheel's on fire' with Rick Danko. Exceptions they are. We have to assume that Dylan is the one this is all about, with a band around him that saw its future clearly in front of it after these open hearth like guitar playing sessions in the basement.

Six albums is too much to take in all at once. From what I've heard so far, it is clear that there are touches of brilliance on Vol. 11, some that were never completed. If the listener accepts the jokes, the stops and starts in songs, the abrupt endings, the mistakes, the laughing, he gets a view into days long gone when six musicians played without any pressure, playing for the fun of it and creating a few masterpieces (to be) along the way. Just like what happens in any rehearsal room around the world, what usually is never heard. This is what Vol. 11 allows us to do, to be almost a fly on the wall.

The most surprising thing is that both Dylan and The Band, after a period of frolicking in the basement, went back to their respective careers and and both knocked out another bunch of songs. Dylan most of all, while The Band used some of the songs for 'Music from Big Pink'. In 2014 we finally, officially, get to know what it was all about. For the Dylan fan, the box is expensive but certainly worth every cent. For the non-fans, don't even bother to start listening. For those who never heard Dylan, brace yourself and go for 'Blonde on blonde', 'Desire' or 'Nashville skyline' first. If that is to your taste, come back and emerge yourself in The basement tapes complete. History was made on this set, a new sort of music came out of it. Nowadays we call it: Americana.