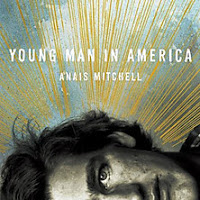 You can listen to 'Coming down' here.

Surprises in music come to me every once in a while. I had never heard of Anais Mitchell until recently an acquaintance tipped me to listen to Young man in America. So I did, being the sort of guy who follows up tips when he feels like it and so was treated to a deliciously "small" singer songwriter album with loads of ear candy on it. Once I got on the good side of Mitchell's slightly nasal tone of voice, things only got better and better.

Looking up Anais Mitchell on Wikipedia it is clear that she's no new kid on the block. Young man in America is her fifth full length album, following up Hadestown, an album of collaborations with the like's of Bon Iver, Ani Difranco and others. Do not forget to listen to this album also is my advice, as it is a true treat.

This album ranges from slightly more poppy songs to the barest of songs like 'Coming down' in which naked emotions are only accompanied by a piano at first and an accompanying male voice of Chris Thile before the song fleshes out just a little. Enough to add a small spike to the deeply melancholy mood Mitchell spreads out over the listener, mainly by sole piano notes.

Producer Todd Sickafoose managed to grasp the pureness of Anais Mitchell's music. Her almost childlike voice is given a setting that makes it clear to all wanting to listen, this is very much grown up stuff happening here. At the basis this is folk music that is presented to us, but hidden quite well. It's necessary to listen carefully to notice typical folk changes in the chords or the way a phrase is sung. In the combination of the fairly bare playing that accompanies Mitchell, an atmosphere of delicacy is created that suits her very well, and me by the way.

I have never been one for lyrics. Regular readers of the blog will have noticed this. All signs point at that I should with Anais Mitchell as she writes whole stories. (Hadestown can even be called a folkopera, I understand.) One song on Young man in America is based on a story her father wrote over 30 years ago. He is the man on the cover. I'll promise to listen next time I put the album on.

Anaïs Mitchell is compared in the press to several lady singer-songwriters, but I have never heard a song by any them as far as I'm aware. So I can't really help you, listener, convincingly here. On a few songs she reminds me of Joan Wasser (as Policeman) on her 'Real life' album. Only slightly, as Wasser's album is more translucent. So Mitchell's album is more like nothing I've heard before and I like it. That's the main thing isn't it?

You can order Young man in America here