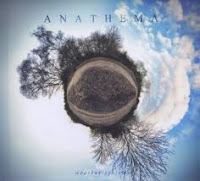 You can listen to Untouchables, part 2 here.

It's several years back that Anathema first got my attention with the album 'A fine day to exit'. |Nearing eleven years I just found out. After that album they also went of my radar, until a review alerted me to Weather systems an album with a beautiful cover. Checking the album out, I soon noticed that the review had seen it quite right. Playing it over and over again, layer after layer of beauty were revealed.

Apparently Anathema started in 1990 as a doom metal band. Whatever that information is worth, it has nothing to do with the present day band. Anathema hovers on the brink of progrock with some true rock infusions but also slipping into straight, beautiful ballads as in Untouchables, part 2. In which female singer Lee Douglas excels side by side with Vincent Cavanagh. The singing in general is just plain good on this album.

Anathema plays well with boosting songs out of proportions and still keeping them small enough, so they function as songs and not as symphonies. Well, most that is. Tension is built up step by step in a song like 'The gathering of the clouds'. Waiting for a release that does not come, which the song perhaps deserved. This trick. I'm glad to say is not repeated in most songs. Release is provided.

There is a difference in the way I appreciate this album. On the stereo with volume up just a little, the album sits better with me than on the headset. I haven't really found an answer for this, but it's there just the same. On the head set I get a bit bored, as the mid-tempo songs just seem to go on and on, where on the stereo the songs seem to come alive more. Like in 'Lighting song' where the guitar seems to split open the aural spectrum like lighting does with the sky.

In the songs where Lee Douglas sings Anathema reminds me of goth-rockers with female singers like Within Temptation and The Gathering. The last band specifically as synths also play a role on Weather systems. Most songs are moody and structured in layers. Often starting in a quiet mode and raised to more challenging music. Weather systems in other songs remind me of Marillion of old. Maybe still, but I haven't heard an album of them since what, 1990?

At the end there is a piece of spoken word in 'Internal landscape', a bit too run-off-the-mill if I'm honest. A near-dead experience and a lot of white light and peace. It's not something that I tend to listen to again, were it not that there is a song hidden within the spoken word section and a good one it is too. 'The storm before the calm' (also a way to look at things!) is another of the songs that stick out to me, with its electronic soundscapes and more forceful playing. It lends some urgency to the album, especially in the ending of the song where the mood is changed again.

Overlooking the whole review it's clear that I have some mixed feelings about Weather systems, but the fact that I have played it several times in the past few weeks, does justice to its quality. Prog like rock is not really my cup of tea, Anathema has made a nice exception to that rule. Nothing's as changeable as the weather, isn't it?

You can order Weather systems here