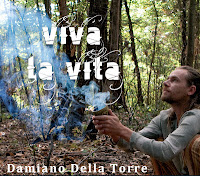 You can listen to 'Almost spring' here.

Damiano della Torre is, among many things, the producer of Beth Wimmer's latest cd 'Ghost and man'. The beautiful sound of the album and the intricate playing on the album, mostly by Damiano himself, made me curious to his own work. Although his latest effort 'Viva la vita' stems from 2010, it may be unknown to most readers of WoNoBloG. So here's a review introducing Viva la vita.

If anything sticks out at the first listen, it's two things: that the songs in Italian are sung with more confidence and sparkle more and that his influences range from Hendrix to Zucchero. With the name of Adelmo Fornaciari, nicknamed Zucchero, I gave away most of my knowledge of Italian rock music. Through the decades there has been an odd Italian record that became a hit in The Netherlands, but it's not standard. I haven't even heard anything for years by Eros Ramazotti. In 2001 I picked up an album of the rock outfit Negrita in Rome, which I've played for a while. One of the songs on Viva la vita, 'Cosa sento dentro', reminds of this album quite a lot. Good riffing, sharp guitar soloing and a very pleasant organ in the background. Not to forget good singing, with this rough edge Italian male rock singers all seem to have. To the best of my recollection, I do not own any other Italian album than Negrita's 2001 offer.

Della Torre has several albums to his name with his band Radiosky and has been active as a session musician and producer since the 1990ties. Viva la vita is his first solo offer. Clad in a new age travellers outfit and showing all sorts of coloured smoke in the cover booklet he literally seems to offer his listeners his new music.

Stylistically Viva la vita is all over the place. We race through pop's history. Jimi Hendrix lead lines hidden in the back ground of 'Call me', fairly slick rock-soul songs of the seventies in 'Don't look back'. Full out rocking in 'Facciamo bene l'amore', which ranges towards Neil Young at his hardest with a great organ solo. In 'Sveglio' he sounds close to my Spanish favourite of many a year, Jarabe de Palo. Some up tempo reggae-ish 'Freedom' and seventies jazzrock soloing in 'Guarda'. In general there is some really good guitar playing on this album to enjoy, in very different styles.

Della Torre nearly plays all instruments himself. So listening to Viva la vita makes me feel a little in awe, that these songs were built layer for layer by one man. He has kept a good overview of where he was and where he wanted to go, as the album is sounding meticulously. There is playing by Della Torre's friend and colleague Max Gini on saxes and other copper and woodwork, who is sadly remembered by songs on Beth Wimmer's 'Ghost and man' album.

All in all the album is not 100% to my taste, as not all the styles are my cup of tea. Still there are several songs which I think are really good, so that the album is on the good side of my scale and will be played again in the future. For those loving Italian rock singers, they should check Damiano della Torre's album out straight away and all other's can give it a try too.

If I'm allowed a personal advise, I would say to Damiano to sing in Italian only. It sounds an awful lot cooler and suits his tongue better. That I haven't a clue what he is singing about, is of less consequence. I know a great rock song when I hear one. Allow me here to mention 'Facciamo ...' again. For now let's make do with the message Della Torre gives us that I do understand: Celebrate life!

You can order Viva la vita via www.damianodellatorre.com