Not your kind of people. Garbage 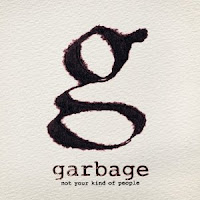 You can listen to 'Not your kind of people' here.

When Butch Vig all of a sudden turned up in the limelight as a musician in the mid nineties this was news. By then famous for producing 'Nevermind' and 'Siamese dream' (and with hind sight 'Gish') he turned out to be the drummer of a new band called Garbage. Three middle aged men and a young Scottish singer called Shirley Manson. The band proved not overly productive. To be honest I'd expected not to hear from them again after the not so successful, nor particularly special album 'Bleed like me' from 2005. Of course the band had had some success before. Even a few hitsingles, but not much which kept me up at night, not being able to sleep from sheer excitement.

In 2012 this part has not changed as I tend to be a good sleeper. What has changed, is that I've played Not your kind of people more than all previous albums together. There's a snare played inside of me resonating from 'Automatic Systematic habit' all the way to the bit tacky ballad 'Beloved freak'. The album has a little bit of everything, ranging from electrified, spiced up rock to some great pop songs.

Garbage is around for almost 19 years in 2012, but Butch Vig, Duke Erikson and Steve Marker have been making music together for much longer. It was only when they started making music that led to Garbage, they had the idea to look for a female vocalist. This became Manson after one of the guys saw a video of her band Angelfish on MTV.

'Control' is one of the songs that show the prowess of Not your kind of people. It starts off sounding like a ballad. It could be Madonna or Adele, the song could go any way. At 0.38 all hell bursts loose. Garbage lets it rip into a great rock song, with a mean, almost dissonant harmonica and Manson changing from an angel to a snarling bitch. The band has always worked hard to be more than a simple rock band. Electronics have no mysteries to the band members and all sorts of effects are woven into or on top of the music and vocals. To great effect too.

Another asset is the diversity in the songs. More so than I remember from previous albums. The title song is a tacky song deep down, but the sound treatment makes it down right interesting. Added to the mix is some great vocal harmonising. The way simple oohs and aahs can be placed/sang, still amazes me every time this is done in just the right way. Manson does the trick here. I also definitely like the guitar in the left ear corner. The driven 'Felt' is another great example of the different songs that are on the album. Plain catchy.

What may be the biggest difference is that I have the idea that Manson is singing better (or that the songs are more suited to her voice). On previous albums I always had the idea she was straining her voice, while here she's singing great. Using the different shades of her voice to perfection. As if the band and its singer have finally really found each other. All this has led Garbage to their best album to date. It will not be a commercial success like its first two albums, Garbage and Version 2.0, but nothing is nowadays. Not your kind of people is a great rock album with different shades and colours, a true addition to my record collection. It made me change my opinion of them. My kind of people after all?

You can order No your kind of people here