When I happened to surf the net circa two months back I ran into an offer from the band Monster Cat on The Pirate Bay offering their debut EP to the world there for free for only three days. I was totally impressed by the music the band offered as can be read here. So I decide to return the favour and offer the band some free exposure on WoNo Magazines blog. Here's the interview.
I got introduced to the band through a free download of your EP Mannequins on The Pirate Bay. Did this action fall into the marketing plan for the EP and did you get a lot of responses?
Cool. We hope you like our music. We were always trying to figure out unconventional ways to bring our music to a global audience, and we stumbled upon The Pirate Bay’s new promo mechanism The Promo Bay

The response was overwhelming. We were getting Facebook messages, Youtube comments, tweets and emails almost non-stop over the 3 days. The majority of the comments we received were very positive. We got around 150,000 unique hits over the 3-day period (most of whom we think would have downloaded the album), from 198 different countries. 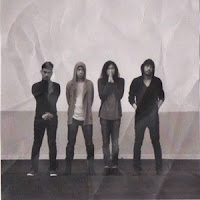 We got messages from all over the world, from Brazil to Finland to Iran to India, telling us that we were doing the right thing with The Pirate Bay promotion and that they enjoyed our album. Given the comments from listeners, it was evident that they really appreciated our move to make our music free for download. In fact, it was a huge driving force for them to click on us and even make an eventual purchase.

File-sharing is a reality that involves millions of users every day. These consumer habits are here to stay, and it forces all denominations of the music industry—artists, fans, labels, distributors, and gig organizers—to re-examine how music is created,shared and enjoyed. These are the consumer habits of today and we feel that it’s a situation that has no straightforward answers and calls for creative, unexpected solutions rather than the use of moral force or the law to protect a status quo. In a way, we wanted to make a statement that music should head back in the direction where power belongs to the listeners and fans.

Let’s discuss the band first. Your bio on the website is mysterious on where you’re from and who you are. What can you tell the readers of WoNo Magazine about the band?
We are a 4-piece alternative folk-rock band, and we love cats and large furry creatures with bad tempers.

On the basis of listening to the music I thought you to be a U.K. band. Presently I think you’re from the U.S., but then I discovered the video to ‘Underwater’. I’m confused. Where are you from?
Haha. We’re from Singapore. But we believe it doesn’t matter where the music is from, as long as one likes it. That’s why we’ve never really emphasised our origin. Besides, we do hope to set up base overseas and bring our music to more listeners.

I looked up the Monster Cat story on Wikipedia. What is the link to the band’s name?
Well, we take our name from the "bakeneko"—a supernatural “monster cat” in Japanese folklore that haunts households. And there's actually an interesting story behind it. Copy Cat was home one day when he saw paw prints on the ceiling. He has a cat at home but prints on the ceiling is a whole other creepy matter. This led to us finding out about the myth of the "bakeneko", and everyone was pretty fascinated by it. This came at a time when we were thinking about a name for the band, and we felt that the haunting and primal quality of the "bakeneko" myth reflected how the music sounded well.

The first song of the album is called ‘Initiation’. Is there a relation between the title of this song and picture on the cover of the album?
Interestingly, ‘Initiation’ was actually the last track that was written for our “Mannequins” EP. But it’s intended to be an introduction and ‘initiation’ to the world of MONSTER CAT. We’re pretty obsessed with myths and rituals, and it’s a subtle way of us ushering listeners into our inner circle. All the songs, song titles and visuals (album cover, booklet images) are meant to complement each other. They all help to express what “Mannequins” means to us, and what it can mean for the listener. And fun fact – the ‘mannequin’ on the album cover is a real person. A friend of a friend. Naked booty yeeha!

In my review of the album I tried to pin your music as reference to the readers. I had a hard time as it seems to go all over the place. Having listened more often, since I come up with this. Ranging from progrock, Pink Floyd, CSNY, maybe even opera in small parts of the choruses, U2 and Coldplay like guitar playing and singing like Deacon Blue. Let me stop here and hand over to you. What artists are influences to you?
Wow, that’s the first time we’ve received those references. Haha. Especially CSNY and Deacon Blue. Pink Floyd! High praise, Sir. Thank you, thank you. Our main influences are Fever Ray (the way she mashes myth and music so viscerally) and The Smashing Pumpkins. But individually, we listen to a lot of stuff – various genres and languages. Some music we’re into now include Alpines, the new Silversun Pickups album, Siouxsie and the Banshees, producers like xxyyxx and Daisuke Tanabe.
Funny you should mention Pink Floyd… During the Music Matters 2012 conference held last month in Singapore, Bob Ezrin (producer of The Wall, Kiss’ The Destroyer and various Alice Cooper albums) had a listen to our album. Apparently, he really liked our music and was annoyed he couldn't find our email off the "Mannequins" CD to get in touch with us. LOL. So we've been trying to contact him, to #FINDBOB. It's a real honour to get a shout out from him and hopefully we'll be able to carry on the conversation with him about our music and maybe future productions.

A few of your songs seem lighter than their surroundings. Almost as if they are floating. Is this an effect you’re aware of and go for in recording songs?
It depends on the song. Especially for ‘Underwater’, we wanted to create an atmosphere that could fully express the story. We’re suckers for details and every clink or hum in the album is meant to be there, and has gone through a tedious thought process. There’s a lot of experimentation and exploration, sometimes with very unusual processes to create the desired sound. In fact, the opening ‘metallic’ hits you hear in ‘Underwater’ are a result of us whacking a steel drain with a baseball bat.

Kazuo Ishiguro wrote an extremely intriguing novel titled ‘An Artist of the Floating World’. The protagonist in the book is an artist whose master was very interested in painting scenes from the pleasure district... he used an ephemeral style to depict the equally transient floating world of that district and of those nights. There's something in that which ties in very, very closely with what you mentioned and our music. Well... we won't go into details but you should read the book.

From your post about The Pirate Bay action on your website it’s clear Monster Cat is motivated to affect people, but also that the band members make sacrifices to make music. Is the latter worth the former?
Individually, we all were willing to make sacrifices to be able to do music for a living. That was the reason we got together as a band. It was about giving ourselves a shot at doing this – for making music is a privilege. It’s always a fight to be able to do what you love, and we wouldn’t have it any other way.
Through The Pirate Bay promo, we’ve been able to connect with listeners all over the world. And it’s a joy to be able to converse with people about music. It truly is. To make music, to share music, to enjoy music with others – it’s all worth it.

In ‘The courier’ lead singing duties are switched. On what grounds do you decided who sings?
“The Courier” was meant to be a conversation between two lovers and having twin lead vocals on the song serves that purpose. We’ve always worked on the rule that whoever writes the bulk of the song should sing it. He will have the clearest idea of the imagery, the intention and most importantly the emotion of the song.

What can we expect in the near future from Monster Cat and any chance of seeing you live in The Netherlands soon?
We're hard at work on our full-length album, which will be composed entirely of new songs. We're toiling to take our songwriting and performances to the next level. Tour-wise, we may have a few big ones coming near year's end, so we'll see. We're also looking to play Germany's Reeperbahn Festival organised by Music Services Asia. It will be a kickass experience so please vote for us! We're running a Twitter contest where you can win an exclusive new merch line if you help us out, just head down to our Facebook page for more. We will run naked around the Berlin wall. Danke. And if all goes well, maybe we can make a pit-stop at The Netherlands! That will be mindblowing. We’re just afraid we’ll get too high to play properly. Ahem.

Thanks for the interview. I’d like to add that you have affected me with your music. Something like the song ‘Dignity’ by Deacon Blue did at a festival a long time ago.
No, thank YOU, Wout. It means a lot to us, to have anyone take the time and listen. We hope to bring out more new songs for you! And we’re gonna check out ‘Dignity’ by Deacon Blue!

You can order 'Mannequins' by Monster Cat here.
Gepost door Wo. op 10:47