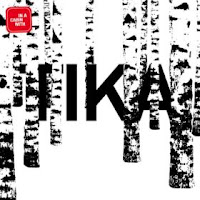 You can listen to For better or for worse here.

Every so many months I receive an e-mail. I can't even remember why and by whom I was alerted to this initiative. To the existence of this option to download these free albums, but fact is that I've downloaded several albums over the past three or four years. In a cabin with ... is an initiative in which musicians are joined in a special cooperation effort. The music that is the result is released under the moniker In a cabin with ... It's not totally free. The price is one tweet advertising the album. Free music? Let's match this with a blogpost in return.

As an aside. Tika was a girl witch, daughter of a sorcerer in a Dutch children show that was shown five days a week at 18.55 till 19.00, the moment television started on weekdays. By then I was just too old, but watch as the whole family watch the, then one of two channels, as did the neighbours, your friends. We all saw the same show. When things tended to grow wrong, Tika had this trick. She clapped her hands and all motion stopped, so she could fix things quickly before clapping hands again. Watch this highlight of Dutch early seventies television here.

The latest effort is called In a cabin with Tika. Tika being Marien Dorleijn of Moss and David Pino van El Pino & the Volunteers, both Dutch bands that have moved beyond the Dutch underground, with Moss clearly a step or what ahead and starting to branch out in Germany coupled to Julian Harris Brown of Feist and one Blake Howard.

I started enjoying this album already in the first songs 'Here I go again' and 'For better or for worse'. The first a slightly rocking song, the second a more folk like tune. Dorleijn and Pino use their voices well and harmonise in a pleasant way. The ease with which they play and compose together, makes it clear that they easily could have formed a band together. Perhaps two captains on one ship, but if they step back in time strengthening each others weaknesses and using each other's strengths, it clearly results in somewhat more poppy songs than with their own bands. Sixties great-grand beat bands and a grand-band like Blur come to mind. The song and the singing is what Tika is about. Sometimes more poppy at other moments more singer-songwriter ('Hardware store') focused.

Tika keeps the songs small. Probably stemming from budgetary restraints, but if so this forces the band to work in this confined setting and focus on the songs themselves. Listening to a song like 'The station' it's clear this formula works. The tension the muted guitar builds, leads to a short great chorus, including great harmonising. The effects in the song are minimal, but all in the right place. It makes me wonder what Tika is capable of achieving if this was a real band. 'The station' is one of the signs that one + one is clearly three in the case of Tika.

On this album Dorleijn and Pino clearly sail their ship of inspiration through waters stemming from the well of singer-songwriter as well as pop bands. This contrast works well in 'Guest house' and 'I died so many times'. The contrast is even quite surprising and pleasant. The lyric is funny as well. "I have died so many times to know this is not one of them". This level is kept up for the finale of the album and especially in the heavenly 'Sleepless beauty'. So, concluding I have to say that I enjoyed Tika a lot more than both artists' respective  last regular albums.

For more information on In a cabin with and the Tika album, click here. Remember, you have to pay with a tweet. You may even expect more on the project itself after our reporter .No delves into the topic sometime in the near future ....