The ghost in daylight. Gravenhurst 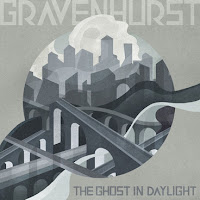 You can listen to 'The prize' by Gravenhurst here.

This album kicks off so beautifully. The acoustic guitar plays a motive for most of the song, some noises, a very flat 'aaaaaaahhhh' background vocal, while towards the end an electric guitar's power is unleashed and barely contained. On the brink of feedback and back. Avery thin line by turning the volume up and down, up and down. A beast ready to jump, claws and fangs at the ready, at its trainer. With a flick of the wrist the whip cracks, holding the beast in place. Nick Talbot, he is Gravenhurst, manages 'Circadian' masterfully. A song of great beauty and intensity.

Gravenhurst is Talbot's project. Originating in Bristol in the UK, Talbot has moved his project in and out of a band phase. Recently he performs mostly alone, aided by all sorts of loop and sampler machine on stage. The ghost in daylight is his fifth album, although he is involved in side projects and movie soundtracks.

The ghost in daylight is not exactly good-time music. Solemn is an appropriate word to describe the mood. Slow paced songs, shaded from grey to dark and sung with a downish voice. Sometimes slightly drawlish at other times clearer voiced. This does not mean that there is no beauty to be found on the album. On the contrary. Intricate guitar playing is matched by beautiful melody, like in 'In miniature'.

The album reminds me of many a great album and band. The ghost in daylight gives a glimmer of what Nick Drake could have sounded like if coupled to a producer with some more grit in him. Musically Talbot and Drake are kin, but Talbot has a clear conception of where he wants his songs to go, where Drake was depending on others for musical direction. Gravenhurst at times produces the same sort of dreamy songs, 'Three fires', but the atmosphere is just not the same. Nothing's optimistically sixtiish any more.

Radiohead is a clear influence. 'In miniature' is a song that shows that when all Radioheadtronics are stripped away, this is what remains. Nick Talbot's voice is not very unlike Thom Yorke's. You can hear that clearly in 'The prize', which is a great song in its own right, with a Sophia like guitar outburst at the end. The 80ties didn't pass Talbot by unnoticed either, as the synths (drums) in 'Islands' show. The Human League or Tubeway Army without the fat, more up tempo synth drums, 'Oh Vienna' without the passion of days long gone. A last reference is Sparklehorse, as well in the provided background noises, as in song writing. Listen to 'The ghost of Saint Paul' to hear what I mean. Even the voice is slightly manipulated like the late Mark Linkous did two nudges up on the vocoder. So some Sparklehurst any one?

The ghost in daylight holds some great acoustic guitar playing. Talbot has come up with some beautiful melodies on the instrument and plays it with clear and laid back panache. He shows us what he is capable of without showing off. In the background of the more quiet songs noises hover, drone like sounds, giving the songs a slightly eerie atmosphere. The mix between these songs and the more orchestrated ones is what gives the album the little extra it needs to stand out. To top things of there are little instrumental miniatures in between, sometimes disguised as a long intro.

This album sort of slowly crept upon me and tends to stick. Gravenhurst has made an album that forces the listener to listen intensely and slowly sucks him into its world, wondering what will be next. The ghost in daylight manages to give folk and singer-songwriter a whole new perspective on the genres. Perhaps not unique, but definitely of high quality.

You can order The ghost in daylight here