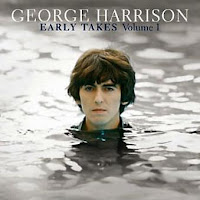 You can listen to 'All things must pass' here.

Oh, no. Not another outtake album, was my thought when I read a review of this George Harrison offer. Usually they cost a lot and after listening to it once, perhaps twice, the album (or even boxset) simply disappears into the cupboard with all the other trophies. Of course, curiosity got the better of me anyway and here I sit listening to Early takes and already writing. And then to think it's starts with a bare version of 'My sweet lord', his staple no.1 solo hit song. My head started playing all the overdubs outside of acoustic guitar, drums and bass. Disappointment kicked in after the first notes. Highly sceptical I got to song #2 on Early takes, volume 1. That's when the magic kicked in. The sheer beauty of 'Run of the mill' and all that followed, the pleasant familiarness of Harrison's voice and the quality of his songs captured me, held me enraptured for just over 30 minutes. The basic setting of the studio try outs suits George Harrison like a glove.

The last years in The Beatles George Harrison started to write his best songs till then. In fact, coming up with songs like 'While my guitar gently weeps', 'Old brown shoe', 'Here comes the sun' and of course 'Something' (played to this day by Paul) he made his songs stand out in comparison. They were nothing but the tip of the iceberg. All these songs started flowing out of him leading to his first solo album(s) 'All things must pass' and hits like 'My sweet lord' and the even better 'What is life'. It remains a question that will never be answered what would have happened to them if The Beatles had decided to record a new album in 1970 any way. Maybe a few would have found their way to The Beatles albums. 'All things must pass' as album title?

It's from this period that these recordings stem from mostly. They are playful, fairly bare, the essence of the songs, showing the quality of Harrison's song writing, a variety of songs that he's clearly comfortable with. Doing covers of Bob Dylan's 'Mama you've been on my mind' and the Everly Brothers' 'Let it be me'. And let's not forget he's "only" practising his songs with the other musicians in the studio or recording demo's on his own. "That is all and then it's finished", you can hear George say somewhat sheepishly at the end of 'Woman don't you cry for me'.

The acoustic guitar sound is so Beatles and so is his voice of course. The songs as such may not be as some go way beyond what The Beatles ever done. The very country like 'Behind that locked door" has a pedal steel guitar crying away in a way that is totally Beatles alien. Perhaps a Bob Dylan influence as George and Bob had been writing and recording together around this time?

George's voice holds up great in the studio. In the end he may not have had a voice to be a lead singer carrying a whole show. Here though it's magnificent. So clear as if he's singing right in front of me in the living room. He shows us his different voices, soft voiced in 'Let it be me', a countryish drawl in 'Woman don't you cry for me'. Here a compliment must be given to the producers of this album. The sound is just, I say it again, magnificent and at times simply fragile. George Harrison stripped to the essence George Harrison. Exit Phil Spector, enter George. All things must pass, indeed. Said song is just so beautiful on this album. If anything, Early takes, volume one is a true gem.

Perhaps it helps that, believe or not, I never got around buying 'All things must past', so most songs on this album sound new to me. To me they're new. It makes me truly appreciate this album for what it is and I can't see it as a reissue, outtake album. Thanks for this unexpected present, Harrison family.


You can order Early takes, volume one here