Knock Yourself Out. Ken Fox 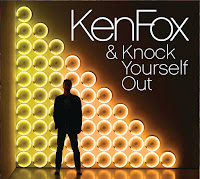 Over the past two years I have sung the praises of Rum Bar Records quite a few times. Not that I like all the releases but with Ken Fox the label, that celebrated its fifth birthday in February, has outdone itself.

After listening to the mini album steam comes out of my ears from brain and body overheating. The energy blast on Knock Yourself Out is enormous. If only it could be caught and stored. The energy transition the world faces would have been taken care of instantly.

Ken Fox may be known to some as the bass player in The Fleshtones. After a 30 year career in music he decided its time to take the mike himself, to present himself in a blaze of musical glory. Of course, Ken Fox is not the best singer in the world, not even close. But for the music he wrote for himself his voice is exactly the right one. Punky, snotty, at the range of his abilities, charged with energy and obviously enjoying the sheer fun of presenting his songs to the world.

In the five songs Ken Fox explores all the corners of energetic powerpop and rock, even a little punk(rock). Not just five songs that fit in snugly with what already exists out there for forty plus years, no, they take the lead immediately. The songs manage something that is not given to all songs of the 1979 period of post punk powerpop. Some have a strong riff, like e.g. 'I Love Rock & Roll', others a nice hook like 'My Sharona' and 'What I Like About You'. What Ken Fox manages to add is a great flowing melody, resulting in a mix of pop, power and full-fledged rock and roll. Knock Yourself Out contains the best of all worlds. Let's call it a punked up The Undertones. Yes, U.K. influences are certainly no strangers to Ken Fox is my guess. He melts U.S. and U.K. music of that age like they were meant that way.

It may be that the five songs are more than enough for a man of a certain age like myself and Ken Fox himself perhaps as well. All this mini album does, is leave me behind longing for more and in want of something better, I just play the album again and again and again. Like Status Quo sings in its finest hit 'Down Down'. After the album went out with a glorious hornsplattered bang, there is nothing else to do. Don't die on me just yet.

The more I listen to Knock Yourself Out, the more I know Justine & the Unclean's' Heartaches And Hot Problems' has a fierce competitor for my favourite Rum Bar record spot. Seldom has enthusiasm translated in so much fun. Knock yourself out by listening to this record, folks. This recommendation comes with a strong warning. Knock Yourself Out is tremendously addictive, but so worth the ride.

You can listen to and buy Knock Yourself Out here: