Are You In Love? Basia Bulat 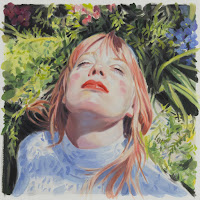 A strong female voice that runs up and down the scales is an attraction that made me return to Are You In Love? easily. Basia Bulat from Montreal in Canada releases her new record in the early spring of 2020. It is her fifth since 2007. It is the first one that I am listening to, as far as I can recollect.

For sure I had caught her name before, but somehow mistook it for Basia, the singer who rose to fame with Matt Bianco, the jazzy-pop outfit from the U.K. who scored a few hits around 1984. So I discarded anything because of that, as I wasn't a fan of Matt Bianco nor Basia's solo outings (as many other things in 80's music).

Having gone past that hurdle, it allowed me to listen to Are You In Love? Strangely enough, noting the difference between the sophisticated jazzpop of Matt Bianco and the singer-songwriterpop of Basia Bulat, there are similarities. Both acts have a tendency to a certain suaveness that moves towards danger lines where I am concerned.

With a voice that I can describe as Beth Hart light, Basia Bulat has the opportunity to give a song an edge and is not afraid of doing so. It certainly lifts her songs on this album. The songs themselves seldom have this edge. Somewhere along 'Homesick' the drums really kick in giving the song and the album a much needed boost.

The same goes for the song 'No Control'. The melody flows just this little more freely. The accompaniment is so much more direct and not aimed at beautiful accents around Ms. Bulat's voice. It is in moments like this that I like her a lot better. In songs that are more sugarcoated I have a harder time to follow her down the road she lays out for the listener.

If the cover art is anything to go by, Basia Bulat likes every moment she can to bask in the sun. That is a something she returns musically to her listeners. There are several moments to bask in soft-toned songs to warm oneself with. 'Pale Blue' is one of those songs that really come across so well. Just like the change in 'The Last Time'.

Adding and subtracting it all, Are You In Love? is an album that puts me on the wrong foot a couple of times. Some of the songs are just not for me, several others I truly like. So when all is said and done, I'm glad I got to know those songs.

You can listen to and buy Are You In Love? here: