Never Not Together. Nada Surf 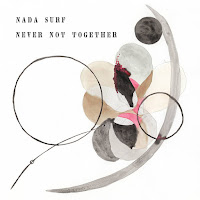 I have not even listened to Never Not Together, Nada Surf's new album and I can sort of write a comprehensive review full of facts. A review that could vary between brilliant and predictable. A review that could waver between 24 years after the release of 'High/Low' Nada Surf comes with its best, most urgent album and a but I have heard this all before.

In other words something is going on on Never Not Together. When the first listening session, I have come to song 6, I looked up the price of the LP but haven't decided to buy yet, brings me such varied thoughts. To really judge the album it takes a little more listening I'm afraid. (Yes, there are times that I write a review while listening to an album for the first time. Not often, granted, but it happens.) Let me come back to you later.

This later is now. 'So Much Love' works its way into my ears again and I love the song so much. Erwin Zijleman already sang the praises of Never Not Together on his own blog and I will do so here. Nada Surf's new album is a modest masterpiece. Modest only because the band presents its music this way. Nada Surf refrains from flag waiving and there are no huge exclamation marks behind every sentence. It is the music that speaks for itself. The way the melodies flow, the small details that adorn a song, the way the music just seems to go forward but never does, is always special. The way three notes can tell it all. On top of that the modest voice of Matthew Caws sounds out. His soft voice doesn't need exclamation marks in the form of screams and shouts. It just brings the stories he's written. Soft and gentle, yet impressive.

For me 'The Stars Are Indifferent To Astronomy' was the first album by Nada Surf I fully embraced. I still have to jump back into the 00s as many people advocate the albums of that decade as even better. Listening to Never Not Together, that must be nearly impossible as this album is so good. Nearly 25 years after its debut album Nada Surf peaks at the highest of pop rock peaks. With its mix of exuberant pop feel and melancholy rock the band keeps me glued to my seat, all ears.

The music on Never Not Together, the truth for any touring band, I guess, brings me in a melancholy state myself. A hint of sadness, of loss can fall over me while listening to 'Live Learn And Forget', and it's o.k. Both are an integral part of every human being getting older. Loss and pain is a part of every life, something we learn to deal with and live on. Live and learn, but only partly forget, as it only takes a song like this to realise and feel loss.

In the ballad 'Just Wait' an acoustic guitar starts the song before the song flashes out. Again Nada Surf plays all the right notes. So many details have gone into the song. Hours of experimenting what fits best and what needs to be discarded have gone into 'Just Wait'. It sounds too perfect for that not to be true.

'Something I Should Do' is a loud if not the loudest song on the album. Moving closer to Weezer's best songs and still this is perfect pop in the form of a powerpop song. The little synth solo gives that away easily. The post punk protest returns in the form of a large spoken word section in 'Something I Should Do'. Caws becomes more and more agitated delivering his lyrics. I had expected to be turned off after a few listening session, but not so. It works perfectly (and gives us the album title in the final words after a total deluge of words).

For the rest of the album Nada Surfs keeps that fine balance between indie balladry and powerpop up for the whole of the way. Exquisite melodies are exchanged between the record and my ears. With 'Ride Into The Storm' the album goes out with a nice bang. The firm drumming of Ira Elliot drives the album home. All the band has to do is deliver on this sound foundation and they do.

Never Not Together cannot be further removed from the band's most famous song 'Popular'. This is a hard working band and nothing like the slacker attitude exuding the (radio) hit song. Live they're great as well as I was able to see a few years back. Nada Surf is at the top of its game. Hearing is believing.

You can listen to and buy Never Not Together here: