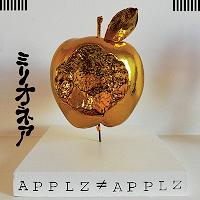 Rock music from Belgium. Quite often this a form of rock that does not fit the mould. When Frank Zappa died in 1993, I remember wondering to myself what his influence on popular music was and I at the time did not have a real answer. It was only a few months before dEUS from Antwerp was to release its first album, 'Worst Case Scenario', an album I did not appreciate at all at the time. Looking back while listening to APPLZ ≠ APPLZ my question of late 1993 has been answered. Nearly all Belgian bands are inspired by Zappa.

Millionaire shows it in many ways. In the weird breaks, the strange voices, the twists. The music stays coherent enough, i.e. it does not go around the bend like on Zappa albums like 'We're Only In It For The Money'. It's in the elements and details. They are identifiably Zappa. In general APPLZ ≠ APPLZ is quite listenable, even enjoyable. To my ears not all songs are as strong as others are, but as a whole Millionaire returns with a fine album.

When was it that I saw the band in the old LVC in Leiden? I can't remember for the life of me. Even the title of the first album has stopped to ring a bell. 'Outside The Symian Flock'? No, sorry. Looking it up, it is from 2002 so the show will have been from around that time. The second album, 'Paradisiac' was too loud for my liking and then the band left my conscience, until recently.

Working from memory here, I notice that Millionaire has more restraint in its music nowadays. All band members will have entered their forties by now. That could be one explanation. The other is that my musical tastes have expanded. What sounded like extremely loud to me 15 to 25 years ago, now sounds perfectly alright.

APPLZ ≠ APPLZ starts with a discussion on the right way eat an apple. Consciously I would say there are two ways. Start somewhere in the middle while holding the top/bottom the whole of way or to peel and then slice it. After a few seconds the band kicks in with 'Cornucopia'. The song more or less sets the standard for the whole album, despite the fact the guitars at first are missing. Guitars, slightly different rhythms and a voice taken through one or other device is that standard. The influence of Radiohead is all over 'Cornucopia', through the way synths are used in combination with the rest of the band and the way Tim Van Hamel sings.

Musically there may not even be happening that much in 'Cornucopia, it is a forceful opening of APPLZ ≠ APPLZ. For a cornucopia a lot of restraint is used though. The bridge turns out to be the end.

From there the album turns left and right where influences and rhythms are concerned. APPLZ ≠ APPLZ is not an "easy" album to listen to. Here's that Zappa element, I already mentioned. Right away in 'Los Romanticos' this element is used the whole of the way. Nothing flows, not the rhythm, not the playing and not the singing. Two things can happen from there on, people turn away or they persevere and start discovering the pearls that seemed to have been thrown at swine at the introduction. For those persevering, the album opens up and shows many different takes on playing songs and points are scored and added to the total as the album grows in quality and diversity.

In other words, there's more than enough to enjoy without declaring APPLZ ≠ APPLZ a masterpiece. That it is not, but there are so many pieces of great music woven in there, showing Tim Van Hamel and his men can still write and play nice, alternative rock songs in the 2020s.