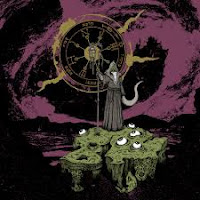 This is an add for people with clogged up ears: play Lantern Of Gius loud and I can assure you that they will be clean. The advice comes with a caveat though, beware of damage to your hearing senses as that is assured as well.

All joking aside, with Lantern of Gius Grotto has released a record that is as solid as Ayers Rock or Uluru as it is known now. This album is a monolith that only on close inspection shows that it does know minor details in the whole. Just like the famous mountain in the heart of Australia does. With a recent, but major difference, only Lantern Of Gius can be inspected up close nowadays.

Readers of this blog know in general I am not one for instrumental albums, but who can ignore a monumental album like Lantern Of Gius? I can't for one. Of course there are similarities with other bands. To mention two labelmates on Stickman, Soup and Motorpsycho e.g. Both love to create long instrumental interludes but return at some point to the song they started out with. Grotto does not. The band pounds on.

The heart of the band is the full out drumming of Arno Cottyn. There's no limit to what he can do on this album. Like the late Ginger Baker in Cream there's a whole spectrum to be filled and he does. As there's no rest for the wicked on Lantern Of Gius bass player Jeroen Moerman has the other half of the foundation of Grotto at his disposal and uses it in many ways. Just playing bass and with a truckload of pedals at his feet to become omnipresent.

Guitarist Marvin Dinneweth plays more than one guitar on the album. Playing full out chords, at times even soft notes but often shredding away like The Sweet Release of Death does on its latest album.

On the two 17 minutes long compositions Grotto, from Antwerp by the way, weaves elements of shoegaze with prog rock. With that it is far more robust than Soup, but certainly steps wide into Motorpsycho territory, to next go widely beyond that band, regularly even.

The result is a monolithic record comprised of two epic compositions that take the listener on a musical rollercoaster ride of musical impressions I can only call impressive. This is not an every day, any moment kind of record. At the right moment it is nothing less that brain shaking. There is only one true surprise. You will find that at the very, very end of Lantern Of Gius. For those with patience for sure, but don't forget to enjoy that fantastic ride in the 32 minutes before it.

There's only one question left: Who is Gius? The Italian surname from the Trentino region explanation on Wikipedia seems way off explaining the title.

You can buy Lantern Of Gius here: