Despite the fact that Wo. is still running behind with his monthly Kairos updates, he let us know that he is not intending to give up on listening and writing about the past shows. The idea is to catch up over the coming months but as you'll have noticed there are so many records to write on. So for now let us turn to his endeavours while listening to the Kairos of the month August, the holiday month.

The familiar piano notes sound out and a piano takes over as if it belongs to the intro, leave that to .No to find that perfect moment to blend different compositions or songs. The two do not belong, of that I'm certain. Following the piano intro a voice comes in. A kind of depressing voice, singing without joy, without any lust for life. With no clue towards the future nor the present. Whoever Bas K. is, he knows how to write a song of this kind. The lyric is a dream as the singer is starting to wake up. Often a moment of vivid intense dreaming with the lucid side of the brain fighting to take over from the unconsciousness. Weaving in and out of each other. The song on the one hand is impressive on the other the lack of a producer is obvious. A great and surprising opening to this Kairos 'Waking Up' is. (And then I find this is a home recording by an 18 year old.)

With Sytze Pruiksma another bird enters the Kairos environment. The Bar tailed godwit to be precise. The composition is a busy one. As busy as the bird's song. The guitar is played in a way that makes me despair the 13 odd years I lost not playing the instrument sooner in life, yet fairly proud of where I managed to arrive at despite the loss of years and supple brains. Pruiksma manoeuvres his song on the brink of symphonic rock and rock itself without ever crossing lines as the instrumental piece, excluding the godwits, is a force in its own right. 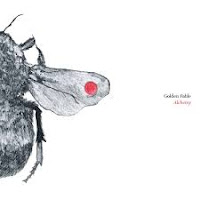 The rest that descends over Kairos is enormous when 'Illuminare' by Chris James sets in. Music that is transparent. A keyboard, a voice singing "oooohhh"; James creates music to fall asleep to and I mean that in the positive sense. He creates a mood that leads to a meditative state, like the Gregorian chants were supposed to do in a the Middle Ages. 'Illuminare' immediately reminds me of religion or better of a church. Like Nick Cave's 'Ghosteen', this is modern religious music, without the religion. At least as far as I'm concerned. I can't speak for Chris James of course.

More busy synthesizer induced sounds move into the voices of Chris James, slowly but surely taking over completely. And then a lonely piano takes over everything. The kind that is played so slow, that, if I did not know better, I could have assumed the pianist forgot the other half or even more of his notes. Surprise, surprise, somewhere in Chris James' music, Jane Weaver was woven in as well. You tell me where 'Illuminare' ended and 'Margin' started. A .No mash up it seems.

The piano is Lorenzo Masotto playing 'You'. Ever so soft, yet melodic. Slow, drawn out, using every bit of air and atmosphere in the recording studio to reverberate his notes. To great success. 'You' is extremely beautiful music. I notice I've stopped typing and just listened.

And then listen to how the violins come in. No, the music can't be successfully remain blended, the first notes though go all out together with the piano of Masotto. It is an aria on violin. If this is sung then I'm out of the room within seconds. On violin, yes, violin folks, the melody moves me. I'm in the right late night mood I notice. Bas K. returns for a short bit over the violin and it fits beautifully for a few seconds.

The next contribution is piano led again. It is a fragment of 'Spirit Of Love' by Colin Bates and Edwin van der Hoeven. Darker, melancholic yet again I notice it touches me. .No has brought me in the right mood, while at the same time I'm tired. It is late at night and I notice that I am not going to finish writing about this Kairos tonight. That is a first, I can assure you. Is that a harp joining the piano? The sound is so high, it must be. 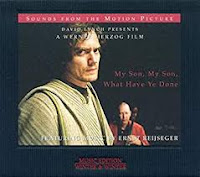 Dark sounding violins join in. Ernst Reijseger shows a very serious side of himself. An accordion joins in, as does a voice. A voice like a confused man, shouting at people on the street, but to be sure always at those on the other side, not his own. A dark, worn voice, that has seen better days. Light is nowhere to be seen. As a whole this Kairos is dark so far. What to make of Reiseger's music? It would not take much change and I would have instantly liked it. Now I'm struggling with the rough side of it. Yet I hear the pearl thrown before the swine in the whole. This is no average composition. It holds the whole world within it somehow.

And so the third Modern Studies album made it to WoNoBlog after all. The cooperation with Tommy Perman did not make it past my ears. Where had the folk gone to?, I kept wondering. What I am hearing contains a little of the folk I remember from the two albums I did review in the past two years. What I am hearing right now is Kairos music. Layers of instruments stacked on top of each other, creating a string of moods but never a song in the traditional sense. Something that causes me a hard time. At the same time I do start to notice when I like what I hear or just the strangeness that invades my ears, especially when I first started to write about Kairos. No, I will not return to Modern Studies and Tommy Perlman's Emergent Slow Acts', but for here it is more than o.k.

The move into Trio Ramberget's 'November' is impressive. As time moves into November tomorrow the title is unexpectedly appropriate. The music reminds me of classical music where it isn't for sure. Analysing it the feeling is caused by the sound of the trumpet. My feelings take me on the wave of sound in the background and foreground. A current of noise, like a tapeloop of a female voice singing aaahhh. It drops away, revealing near emptiness, where sounds hover ever so quietly, before the horn is allowed to emerge from it. Softly, but surely. Despite sleeping a night and working during most of the day, I am back into the mood of this Kairos instantly. How come I am moved by a piece that I would usually degrade as non-music? Moved and impressed. Don't ask me why but I am remembered of Sophie Hunger's music. Perhaps not so strange as she features regularly on this program. 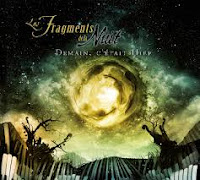 .No presents longer pieces of music in the second half of the program. 'November' moves into 'Demain C’était Hier'. A leaden piano starts off the song, violins join the piano soon for an extremely sad song. The kind that will make people want to cry and played under the right circumstance will. I'd never expected to write to have found musical heaven while listening to Kairos but it seems I have and with a violin. Les Fragments de la Nuit play a beautiful piece of music here.

When the mood is disturbed, it is not Les Fragments de la Nuit killing its own composition, but Chris James who returns with another fragment from his album 'Alchemy', 'Aion'. Again I'm, in all but body, back in church, yet this composition is far stranger then 'Illuminate'. James is experimenting with his voice and from there sees where the digital world can take his voice. This leads to a stack of long held vocal notes, longer than anyone has breath within him or her. The fragment lasts for 12 minutes. The illusion is broken after circa five. The atmosphere remains the same but far too long to keep up the intimacy the composition started off with. Slowly but surely the impression rises in my mind I am listening to monks on something else than beer and cheese, which is sort of funny, isn't it? The image brings a smile to my face.

Kairos ends with another private recording, Tibulibena plays 'Endless' from the same titled single. Yes, singles are still being released, except you can't buy them any more, at least physically, with a few noticeable exception and they are on vinyl for € 15 a piece. The same as cds tend to cost roughly. Again a beautiful piano sets in, playing slow notes. A few on the dark side, at times a few more on the high end. Together they create a mix sounding like a grandparent together with a grandchild, e.g. at the zoo. The ageing sibling with the bouncing youth. Together they are a lovely sight, enjoying each other's company. The elder sets the pace as the youth has been instructed to do by its elders. Yet, it is a high note that sends this Kairos off. The future has it, as it should. This being the day John Bercow retires as Mr. Speaker allow me to add "the future has it. Order!".

You can listen to Kairos here on Concertzender:

This is the tracklist of August 2019: