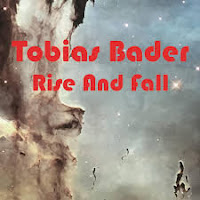 A mini album that reached me after the release day. With a rough voice Tobias Bader leads through the six songs on Rise And Fall. With a fierce rasp he makes sure I notice him. The album starts with a folk mood, a sense of listening to ages old music. It only last a short while this impression. As soon as the acoustic guitar and voice kick in it becomes modern.

Tobias Bader is not a young man releasing his first album. Over the past 35 years he played music but never made work of his music. Now he has a collection of some 50 songs that will be released in the form of EPs and mini albums. Judging from the first instalment of songs Bader has found his voice and has made the right sort of work to present his work in a self-assured way.

Based on an acoustic guitar his songs come by in a mid tempo segment. 60s pop is mixed with folk and singer-songwriter. His voice gives the song a rougher edge. The arrangements show that Bader knows some of the classics but also that he is able to "play with them". A fact that gives a song like 'Freeway To Your Heart' not only a melancholy layer, you'll find a playful and joyful part in there as well. Something showing that Tobias Bader's debut record, despite his advanced age, is totally justified; in as far this ever is a criterium for a release.