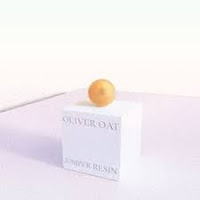 A few weeks back an envelop was dropped on my doormat. It contained a cd. Now this act in itself has become fairly common over the past few years, however it is still an occasion when the album comes from the artist directly. It came with a personal letter, kindly inviting me to listen to his new album.

Oliver Oat is a name that did not ring any bell. Neither did Joost de Jong, the singer-songwriter behind Oliver Oat. Then a reference to Tiny Room Records popped up: Stefan Breuer plays keyboards in the Oliver Oat live band. This explained everything.

For Juniper Resin Joost de Jong worked on 12 very different tracks with producer Floyd Atema. It took him eight years to follow up his last EP 'On The Isle Of Eye. So there is a new album it is of the kind that, almost, immediately demands attention. At first it took me a while to accommodate my ears to Juniper Resin. The first two songs do not come easy. Very different they are too. Now, they are a part of an album that impresses as a whole. How come?

What I noticed while playing Juniper Resin as a whole, is that my attention kept being drawn to the music. Something is happening the whole time. Of course that even goes for the Zangeres Zonder Naam, so that is not what I mean here. Oliver Oat truly explores music, musical styles and within the songs as individual entities. The result is, as already mentioned, a very varied album, with one constant: quality. Without going over the top like the late Scott Walker did on his first solo albums. Oliver Oat does remind me of Walker as he may have sounded had his first solo albums been made circa 50 years later. At the same time Oliver Oats dips his toes in the past and mixes these influences with modern sounds and instruments, carefully building something impressive. And that is when Jan Stroomer's The Stream comes to mind. Like The Stream songs reach a certain level of bombast. The Stream more from a U.S. Billy Joel side, Oliver Oat from a U.K. side from New Order light to The Beatles, somewhere deep down under the slightly alternative sounds. For both the guitar is not a main instrument it seems. It is in the title song that several guitars are let loose, really and truly. Right there and then I wanted to play Soup's last album again next.

Like with The Beatles anything seems to go for Oliver Oat. Just listen to some parts of 'Milk And Cigarettes' and the following 'Snowflakes'. With the French sung 'Louis Et Le Chat' a late night cabaret is suggested, with some Air elements and Serge Gainsbourg vocals. A song that could have been on the last album by his daughter Charlotte and her half-sister Lou Doillon. Three songs and so many differences.

You must have gotten the drift of Juniper Resin by now. Although it is something I write fairly easily I've found, Juniper Resin is a true adventure. There is no anticipating next steps on the album. Although the mood is fairly downcast if not depressed here and there, I find that this is all surpassed by the class the album holds as well. Just listen how 'The Glass' plays out. Yes, with a larger budget this might be the best song released this year, now it is a very good one. There are so many sounds referencing every inch between Nick Cave and Earth & Fire. 'The Glass' spans decades easily through its majesty.

Even having played Juniper Resin many times since receiving the invitation to listen to it, I still notice how the album grows by the song. Each single time. No matter how personal opening song 'Murderer' is to Joost de Jong, it is not the best song on this album. Those songs come forward by the song while progressing into the album.

With Juniper Resin Oliver Oat has not only made its first full length album, it has produced a modest masterpiece that deserves it place in the Dutch pop canon.

You can buy Juniper Resin here: