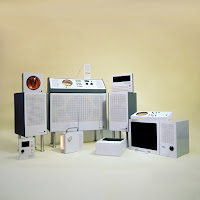 Talking about retro futurism. Like The Jetsons, Star Trek (1966), etc., the cover of The Omnitone Collection seems to point to a distant future in an extremely old fashioned way. A future that will never be.

The music of Elder Island seems to hang somewhere in between as well. There are beats, but nothing like in vogue today. There's exuberance but nothing that moves kids today (as if I know to be honest). The music reminds me more of the lounge music and triphop of the late 90s.

At the same time Elder Island does things right for me, something in this genre that is quite unusual. The melodies are alright, the beats interspersed with enough organic stuff, including the voices, so that my pop side is addressed and recognised, both ways.

Elder Island is from Bristol in the U.K. Of course this music could come from anywhere, but reading Bristol, I was not surprised. Read just above here. The influences of the best known bands from the west-England town seep through everywhere. Singer and cellist Katy Sargent, beat creator and bassist Luke Thornton and guitarist and synth player David Harvard make up Elder Island. Together they make up this blend of past and future, electronics and organic in such a way that even an indie, alternative, 60s, 70s guitar buff like me can easily lose himself in The Omnitone Collection. After two EPs and sold out U.K. shows it is time for an album and here it is.

According to the band all songs start with jams that are recorded. From the jams the best bits are stuck together into a song, which is often a long and arduous process. There's no telling what the alternatives sound like. Probably 30 years from they will be released just like all the old stuff being re-released now. In the meantime it sounds like the band made some correct decisions. The Omnitone Collection is a consistent collection of songs, where Elder Island slowly introduces new sounds and scapes into its music. Where a cello can enter a song like a guest walking into a house for dinner or just to hand over a package delivered next door.

The atmosphere of the album reminds me of the first album of Modern Studies, despite the huge differences in music, folk versus electronics. Both albums hold a certain pastoral atmosphere. Something I'd call typically English, where emotions are held in check no matter what. A keep calm and carry on mentality staged in music.

Anyone who delves into The Omnitone Collection will find some fine melodies and a surprise in sound around every other bend in the album. Who is not afraid of some soft beats in a song should be able to spot the pleasant surprises effortlessly.