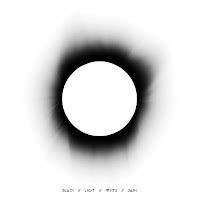 There are albums containing darkness and albums that contain some more. On her new album Evi Vine is not in business to show a lot of light. Black Light White Dark is the right name for this cd.

Because of that I do not warm easily to the album. It is not as if I feel invited to join the "fun". For that the music is too solid and fierce.

So if I can't participate I can sit back and relax. In the old days I was able to enjoy parts of The Cure, more recently Esben and the Witch and Wolf Alice or let the most extreme form (I personally know) of this kind of music wash over me in a live show by A Place To Bury Strangers. By being the truly passive listener something does happen between Evi Vine and myself.

Black//Light//White//Dark starts with a strong song. Dark and brooding, slow, full of atmosphere. The sharp mixed drums, an effect ridden guitar or three, a dark bass. Over it washes the voice of Evi Vine like the waves hitting the beach, relentless ever ongoing. Slow, but never stopping. "I am the waves, I am the ocean" sings Evi Vine, which is quite an addition. The song is impressive and full of tension and also so different from some of the things happening next. The song ends in minutes of silence. Is this deliberate or a mistake in the pressing? Nothing happens for over 6 minutes.

When the second song starts it is as a surprise. 'Afterlight' is far the busier song. The drums pound on the floor tom, while the rest plays like building up a storm. Evi Vine's voice hovers over it all. A treated voice repeats the same phrase over and over becoming an instrument not a voice. There is little variation. Either this song brings the listener in a trance or makes him/her skip the song.

'Sabbath', with The Cure's Simon Gallup featuring, starts out as a grand rock song before it winds down. Again there is mystery involved. Like the band plays shrouded in fog or in the midst of a snowstorm. The sound is audible, yet unclear where it exactly comes from. And then 'Sabbath' explodes again like a truck coming out of that fog at full speed and straight on, scaring the hell out of me. It is in moments like these that I am remembered by Wolf Alice, although Evi Vine is far more vague in its music. Gallup's base is instantly recognisable in some parts. The song flashes out ever more. Layer after layer of guitars enter, blowing it up until the seams are at bursting point. Live this will be ear shattering. Enter A Place To Bury Strangers.

The piano opening 'My Only Son' comes as a, giant, surprise. Evi Vine explores her Kate Bush side. And comes a long way. This song could have been on 'Lionheart' or 'Never For Ever' if the guitar atmospherics had been left out. This point of rest works really well by the way. 'My Only Son' is a beautiful song.

'We Are Made Of Stars' is as mysterious as the title sounds. An instrumental with weird sounds like Pink Floyd used to be good at. Think the beginning of 'Have A Cigar' or 'Welcome To The Machine'. Evi Vine definitely does a pink Floyd mid 70s here. This is not a song but atmosphere and a dark one at that. At the same time I notice how well it is done. The only thing missing is bursting out into a classic song like 'Time' of 'Shine On You Crazy Diamond'. The experimental darkness is totally convincing.

The album ends with the 11 minute plus song 'Sad Song No. 9'. A final name has reached me as a reference, The Black Angels. Psychedelia is a small part of what makes up Evi Vine. In this expansive song Evi, Steven Hill, Matt Tye and David 'GB' Smith together slowly cook up a storm where everything on this album slowly comes together. By then it is clear that Black//Light//White//Dark is much more that I had expected from starting to listen to the album. This album is a gothic monument with all the ornaments attached coming with the moniker gothic, gargoyles and all.

You can listen to and buy Dark//Light//White//Dark here: