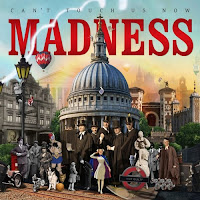 The nutty boys are back three years after their previous album 'Oui Oui Si Si Ja Ja Da Da'. The sound is instantly recognisable, but don't expect the music that graced Madness' first two records, 'One Step Beyond' and 'Absolutely'. The tempo is down to a pace that suits men approaching their sixties. No matter how shocking that sounds. It's what it is.

The cover is very much London as suits a band coming from Camden Town of the 70s. What is amazing that in 2016 the band is back to its formation at the time of its breakthrough in 1979, with the exception of Chas Smash, who has disappeared from the line up somewhere after the previous record. One of the two original producers, Clive Langer, is even on board. Older, musically wiser and in a form that is certainly acceptable.

It's the Madness of the years that the band still scored, major, hits in the U.K., but sort of had disappeared from consciousness in NL. 'House Of Fun', 'Cardiac Arrest', that sort of songs and even then we have to drop the sort of sharp corners that these songs held. So I would certainly not call the music found on Can't Touch Us Now ska or 2 Tone. Madness in 2016 excels in piano driven pop songs with hints at funky stuff in the rhythm guitar.

What is striking that in the lyrics Madness shows the sort of observing skills Ray Davies had in the 60s. Just listen to a song like 'Mr. Apples'. The Rotary Club is aligned to capitol punishment and modern day stress. It's the kind of lyric that adds to the quality of the album. Musically the rhythm is interesting and the lead guitar, organ and sax add very much to the pleasure. Another example is 'Another Version Of Me', where life has changed despite having all the things that seem to have remained the same. The lyric is extremely elementary though 100% recognisable.

On the other hand I have to admit that I have to be in the mood for Can't Touch Us Now. At the wrong moment I truly think that the album is converging on the boring. Too much of the same thing. It gives me a hard time to convince myself why it is a good thing that Madness is still releasing records. At the other moments like right now I'm having a great time. With just Madness in my ears and nothing much disturbing my mood, things are quite alright. The soft ska of 'I Believe'  and the ska mixed with a surf lead guitar in 'Grand Slam' make me wave in my chair while trying to tye, you see what I mean, in the meantime. The number of typos becomes shocking I can tell you.

With the shift of musical focus Madness becomes a more "normal" band, with a more general pop focus. There are even 60s "la la las" to be found. When 'Mumbo Jumbo' starts with its somewhat more up tempo ska rhythm it comes almost as a surprise. The song is fun, but not for nostalgic Madness reasons. Simply because it is fun in 2016. The hooky rhythm, the strong accents in the playing of the instruments, the cut off way of singing. It fits, rough lead guitar, organ and all. The 'Ghost Town' mood of 'Herbert' brings back fond memories. So there's a little 2 Tone after all.

In short, despite having second thoughts at some point, I'm glad Can't Touch Us Now is here. The album is not as good as 'The Liberty Of Folton Newgate', that totally took me by surprise, but certainly as good as 'Oui Oui Si Si Ja Ja Da Da'. Fulfilling is the right word here.

You can listen to 'Mr. Apples' here: