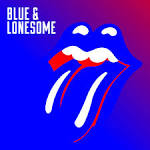 This must be the ugliest The Rolling Stones cover to date and yet it's ultimate coooooool. After 11 years and too many compilations and live records that I care to remember. finally a new Stones studio album. The much craved for blues album is here and that sort of closes the circle, I guess. The Rolling Stones are back where they started out in the London of 1962, two members down and one missing, but very much alive and kicking,

Although theoretically I thought a blues album a good idea when people started suggesting one over the past decade, I always thought that it would be a disappointment. It's never a good thing to try and go back to where you came from. Memory is always rosier than the truth. I hoped for a good new record filled with songs that match Jagger's contributions to 'Super Heavy' and Keith's last solo album. That is not to be, at least not at this point in time.

We have Blue & Lonesome instead. The Rolling Stones did not fall in the trap of making a blues record that is so popular right now. A big, blown-up guitar sound. Larger than life. They play the Chicago electric blues style like there's no tomorrow and who knows that may just be true. Of course the sound is much better than Muddy, Howlin' Wolf, etc. ever could have recorded at the time or the Stones themselves is 1962. The songs are all from that era. The kind of songs that influenced those two youths from the suburbs of London who met on the Dartford train station platform in October 1961. A chance meeting that altered history just a little. The pre-rock 'n' roll music, the blues.

There's another setback in 2016. Every well known blues song has been covered a dozen times over. To rehash these most famous songs would have disappointed. The Rolling Stones managed to present a lot of songs that are not so well known, to me at least, with the exception of the last song, Willie Dixon's 'I Can't Quite You, Baby', that was on Led Zeppelin's first album. It is the starpiece of this album. The Stones recorded a stellar version of this slow blues.

Then the band as such. The four are there accompanied by Darryl Jones on bass and Chuck Leavell on piano. Yes, this is an album where the piano parts of Ian Stewart are sorely missed. Mick Jagger may be exaggerating a bit here and there in his singing, but is in great form as singer and harmonica player. His sharp outbursts really augment the songs in all the right places. Keith and Ronny battle it out on guitar. As ever they weave in and out and have the magic touch as two guitar players ever had, almost as if they have one mind. "We just look at each other", either Keith or Ronny said recently and they both know what the other will do next. In the background someone is playing what he truly seems to like best. Charlie's keeping a tight rhythm and allows himself a little playful fill here and there. A man of little words, but of great rhythm.

Blue & Lonesome is so much better than I imagined and hoped it would be. It's 47 years since I bought my first Stones single from a neighbourhood friend who was tired of it. And here I am, on the day of release with my own copy. They were flying out of the shop like baked sweet little buns. All 50 and 60+ men with their copy of a blues album by 70+ old men. In the shop they played, quite smart marketing, a much more modern sounding, gigantic sounding blues album by Robben Ford. Yes, I'll get it some day, but not today. 2 December 2016 is The Rolling Stones day. A new album, great in sound and songs and a monument to the band's youth. Full of music originally written and recorded by, then, second rate members of U.S. society, factory workers, painters, croppers and street sweepers who picked up instruments and made music that we hear here, the blues. Wth its pace, its licks and its 12 bars. "The blues had a baby and they called it rock 'n' roll", Muddy Waters sang on one of his Blue Sky records of the 70s. That baby, now fully grown, has returned home and honours its parents in a great way. The Rolling Stones honour, deliver, shine. Nuff said.

You can listen to 'Just Your Fool' here: