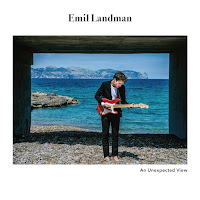 Emil Landman was present in these pages with his debut album over one and a half year ago. His new album was gathering digital dust for a while, but decided to push its way forward any way. This proved to be the right decision as Landman made an extremely pleasant album to listen to. Singer-songwriter songs in a pop coated flavour. Mostly small, modest but full of a quality that is not to be ignored, with a pleasant surprise here and there.

In my review of 'Colours And Their Things' I compared Landman to Shane Alexander. In 2016 I'm going to compare him to another hidden treasure of Los Angeles, Patrick Joseph. Emil Landman has the same soft-spoken directness Patrick Joseph has. That quality of pushing himself forward without extreme assertiveness, both on the quality of the songs and modesty.

An Unexpected View is a singer-songwriter album with a full band. It's all about the songs, but they are allowed to flash out in a pop or a rock way. Others are kept small and are able to simply speak for themselves. No matter the setting, the songs always have their own characteristics and distinct melody. Somehow more mature than what Douwe Bob is doing on his latest album, that I decided to pass up on. Emil Landman is singer, but this is a music album. He doesn't put himself above or in front of his songs. A bit like Thijs Kuijken of I Am Oak presents himself. Yes, he's the front man, yet his voice is part of the whole. In 'Mercy' Emil Landman's voice is really upfront. 'Mercy' is a soulful ballad, slow and modest, so it fits the general mood. A beautiful ballad by the way. One of the key songs on An Unexpected View.

Other names that come by as influences are José Gonzalez and Newton Faulkner. From there the step to Ed Sheeran is within sight, but in general Landman remains much more organic. The singer-songwriter elements are not stripped away for a modern effect. Along with that aspect there remains the band songs. Incorporated in these songs is a west-coast late 70s, early 80s pop ranging from Christopher Cross to Rupert Holmes. With that comes a small hint at jazz tones in the rock.

Looking at the album as a whole, I have the impression that Emil Landman is flexing his wings. To make sure they don't get clipped early on in his career, he is trying out different styles. That includes a poppy, indie rock kind of song like 'Twisted Over You'. With a hard driven acoustic guitar just playing bass notes at a frantic pace the song is different from the rest. Harsher. Not that it is my favourite song on the album, it works in this context and may be the pleasant up tempo song at live shows.

An Unexpected View is a nice next step in Emil Landman's career. One in which he explores different kind of songs and finds his way in them. From up tempo rockers to 60s oriented songs like 'All The Same' or Jack Johnson influenced 'Remain In The Light In Your Eyes'. They fit him and together make a solid album.

You can listen to 'Perfect View' here: