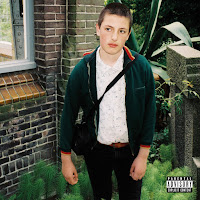 Last year Palio Superspeed Donkey released a great album. The show I was present at was great and after the show we agreed on doing an interview. Except when the questions were sent in, the email address was no longer receiving emails. In hindsight it seems that that spelled the end of the band. Which is a big shame as it was good with a lot of potential.

Enter the fall of 2016 and here's Canshaker Pi with Willem and Ruben of the aforementioned band. The excitement has been upped a little after all.

If opener 'Jals' is anything, it is a declaration of intent. The stakes are up and the noise that engulfs me spells excitement. For the sake of argument the term alternative rock can be used here, just as long as we understand the term as being the kind a little left of centre where alternative rock is concerned. Many names have been dropped to introduce Canshaker Pi, but who cares. Use them as a reference if you like, I'm going to stick with 'Canshaker Pie' for now.

Still the name Stephen Malkmus has to be dropped anyway for the simple reason that the ex-Pavement frontman co-produced this album with Remko Schouten. Together they caught the madness, youthful brazenness and, let's not forget the main quality of Canshaker Pi, pure melodic prowess, on tape. The interaction between the four members, Willem Smit (voice/guitar), Boris de Klerk (guitar/voice), Ruben van Weegberg (bass) and Nick Bolland (drums), jumps out of my speakers. Even at those moments that the speed is left for what it is and the band relaxes into a ballad of sorts, the interplay remains something to envy.

Guitarist De Klerk has a keen ear for melodies that verge on the false that blend with the unsteady, bordering on (seeming) carelessness vocal melodies of Smit. Together they play around with the melodies but never fail to end up where they have to before derailing. That takes either pure talent or a lot of practising to perfect the skills. Underneath the rhythm keeps things together, allowing the other two to explore the room a song leaves them.

At the beginning of this year, see either of the two 'Oor' predictions for 2016 articles in February, I had my doubts about Canshaker Pi. Doubts?, they have molten away like ice in the sun. The balance of 'Canshaker Pi' is simply so good. The rage on the one hand is always offset by melodic prowess or by a surprising piece of arranging on the other. That way the band surprises. Even in the loudest, wildest segments of the album. It is not just about noise and unsteady, alternative rocking. No, this is about presenting the best songs in this segment of rock music. It is all about exploring every cranny and nook of a composition without losing the central elements out of sight for a single second. Just listen to what happens in 'The U In My Dog'. From a simple "I'm So Free", Lou Reed lent riff to sonic storms and back. This is a band that knows what it is doing. There are at least ideas for ten songs in this one song. And they all fit. Together.

Did I like Palio Superspeed Donkey? Yes, a lot, but if this was it for the band, then we have a very suitable replacement. Canshaker Pi, if you're in the neighbourhood be sure to find me there. Perhaps we can even do an interview?

You can listen to 'Jals' here: