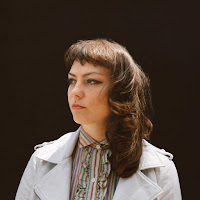 It's been a while since I played Angel Olsen. She slowly faded from memory after that fine record accompanied by a show in Paradiso that I quite liked. Somehow it did not stick. That caused that My Woman was not on the toplist of my priorities recently. In the meantime I found myself going back the album regularly over the weeks. So here we are, a review.

'Intern', the first song on the album comes as a bit of a shock. Has Angel Olsen been pushed in an alternative Lana Del Rey direction by her record company? It sort of hears like it. Not that the song is not okay, it is more that I did not expect a song like 'Intern'.

The switch to the sixties girl pop of 'Never Be Mine' is rather large. Again it is The Shangri Las Angel Olsen style, but it is not hard to imagine the other vocals draping themselves around Angel's somewhat desolate voice. Would that have made the song better? Perhaps a lot sweeter, teenage misery, but not better. This is the kind of pop an adult sings about when things are not going to be alright.

The alternative rocker that hides in Angel Olsen pops up in 'Shut Up Kiss Me'. The chorus can almost be called a punkrocker. It only takes a bit louder guitars to get there. I happen to like the slightly more subtle approach that leads to diversity and some interesting lead lines to follow.

Without having to stop at each song, it is not hard to state that the two and half years since the release of 'Burn Your Fire For No Witness' have seriously expanded the musical interests of Ms. Olsen. Somewhere deep down it is the (alternative) pop side to The Velvet Underground that shines through the cracks of My Woman, including the elements of 60s girlpop. Resulting in a mix that is pretty irresistible.

It is a side to Angel Olsen that was hinted on in the past, that is let loose fully. In several songs she's still holding back, but not nearly as much as before. Letting go is near. As near false notes are allowed in solos. The feeling before perfection? The music on this record attests to it.

What is also abundantly clear is how diverse this record is. 'Heart Shaped Face' is another 60s song that in a slightly different arrangement would be perfect on any of Lana Del Ray's records. While at the same time Blondie could have covered it in 1977 in a slightly souped up version. Think 'In The Flesh' or 'Sunday Girl'. A change is coming though.

From the middle of the album onwards the mood goes down. Slower songs pass by, some even hint at the Barry White soul of Love Unlimited. Slick guitars play suave melodies. Angel Olsen singing in a whispering way. Another surprise as soul is not what I had associated with her so far. Does it work? I'm still thinking about it to be certain. You won't find me switching it off so far. The question is more do I want this kind of song played by Angel Olsen or do I prefer listening to 'Walking In The Rain With The One I Love' more (which I hated at the time)?

The album ends with 'Pops'. You can find Angel Olsen at the piano in this fine ballad. Again something completely different. Exit lo-fi folk, enter, well, what exactly?

The moodswing from rockers to ballads is hard to make if I'm in the mood to listen to more rockers. At other times the switch is welcome. That is the main problem I have with My Woman. Once I set myself over that, my overall impression is that Angel Olsen has set a good next step in her career. She is experimenting with other kind of songs to see whether they fit her. That answer is yes, they all do. It is too bad that these experiments can only come to us once every two, three years. We're all old before this ends. There ought to be another album next spring and one in the fall of 2017. That would make things a lot clearer. For me, but certainly for Angel Olsen.

You can listen to 'Shut Up Kiss Me' here: