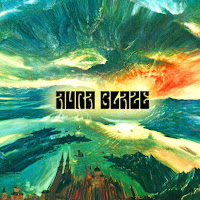 From a like to the blogpost on Primitive Smile by Emanuel and the Fear to a blogpost on Aura Blaze? Stranger things have happened, I'm sure. The like brought me to Aura Blaze's Bandcamp site with its latest album and some other, older ones.

Aura Blaze is a latter day Mike Oldfield. That all songs were written by one person only is not so exceptional. That with the exception of the organ solo in 'Sub-Earthen Patchwork Torus', played by Carl Rachel, all instruments are played by Rhode Rachel is more special. Now that organ really tears things apart in 'Sub-Earthen Patchwork Torus', making the mention totally deserved. Robin Piso of DeWolff would be proud if he was the one playing here. DeWolff is a reference in general, but also more rigorous in most of its songs, but we are in its territory. Rock, pop and psychedelia, all come by on Aura Blaze in different guises, but all extremely pleasant and pleasing. It is difficult not to be tickled by what is coming by here.

Aura Blaze can set off in a grand style. After a guitar progression in a 'Smells Like Teen Spirit' style  intro a full band kicks in. Rocking all out. At that point in time the song can go in very different directions. From grunge light to The Beatles. The moment Rhode Rachel starts singing things change. Someone close to me calls it bathroom style singing and usually demands something else on the speakers. I prick up my ears. Sweet psychedelia. The song is an aural version of the sleeve design. All the instruments are ever present in full presence, blurring at the edges. "I won't let you down' is the central part of the lyric in 'A Glass Of Tears Half Empty' and the music sustains this for 100%. There's no falling through the cracks here.

I'm glad Rhode Rachel knows his Goethe: "It is in self-limitation that a master first shows himself". If the album had consisted of songs this big only, Aura Blaze would have floored me somewhere halfway the album. It doesn't. Overkill was just around the corner for Aura Blaze. It never took that direction and went for glory instead.

Everyone who starts with the first song, 'White Lotus Chakra Blossoms in Pranotthanic Euphoria', knows that already. Spoken, distorted words over music that is slowly being built up around an organ theme. When released the song grows into the lotus that opens itself with firm drums and a great electric guitar. The song titles do remind me of Marble Sheep, the music at times, but remains more on the song side of things.

'Life Is A Lucid Dream', the second song on the album, is a song that could have been recorded in the second half of the sixties. Without pinning it to one specific band, it is more a morphing of many British and U.S. bands of the era, the time comes alive totally. A strong melody and full of fantasy. You will find a few more of these glorious songs on Aura Blaze. Songs that are instantly pleasing and have it in them to grow as well. Rachel knows how to add an interesting lick and attractive solo or harmony to the mix. Neither is he afraid to add another instrument, creating a full sound in which each instrument has its place and moment of glory.

And here I'm touching upon one of the strong points of Aura Blaze, Rhode Rachel is an expert arranger. So much is going on and nothing appears to be out of place. In that the album, the style of music totally apart, reminds me of Steely Dan. No matter how complex, it all seems so effortlessly. There are more modern comparisons as well of course. Aura Blaze certainly has listened to The New Pornographers at least once. 'Gold Sparkle Sun Design', attests to that.

Aura Blaze may be for over a year on Bandcamp, to me the album is totally new and it deserves more attention. I have heard many psychedelic rock albums over the past few years, not many as good as Aura Blaze though. Aura Blaze presents a perfect mix of pop, sixties psychedelia and rock combined with a modern day attitude. When all's been said and done Aura Blaze may have its head high up in the sky, its two feet remain firmly on the ground, creating the best of both worlds.

You can listen to and buy Aura Blaze here: