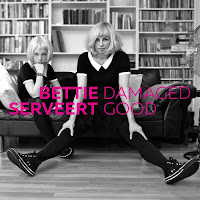 Good(s) may be damaged, but that doesn't apply to the music on 'Damaged Good'. Is it just me or has Bettie Serveert released its third whopper of a record in a row? 'Oh Mayhem' is in my list of favourite albums of the 10s too date and I don't think this new album is any less. If over time not better and certainly more subtle. With drummer Joppe Molenaar, let me say it once again, Bettie Serveert was offered a new leash on life and music. The energy of its drummer reflects in all it does.

Damaged Good kicks off with the kind of indie, almost punk rocker 'B-Cuz'. In the best Bettie Serveert tradition the band rocks out, but there's this heavy riff going straight through the song, but also this organ that adds a little extra flavour. The softer intermezzo gives the song extra depth. The ideal opener for a new album. I can see Peter Visser rock out in his own special way, one with his guitar, pedals and amp. Together they are a human driven machine. The song to open the shows with. Yes, I'll admit it, I'm a big fan of his guitar playing.

That the listener is really in for a trip with Damaged Good is shown in the second and third song. 'Brickwall' is this slow atmospheric song, just two guitars and Carol van Dijk's voice. The solo guitar plays long sliding notes, heightening the mood. After a short silence it is not 'Brickwall' that continues, but in all sense and purposes it could have, as 'Brother (In Loins)' is the up tempo brother of the song that went before it. The light notes in the intermezzo, again great use of dynamics, make it one song.

By then it is clear to me that Bettie Serveert has made another step in its career. The band has on the one hand accepted that what it is extremely good at, up to mid tempo indie rock songs with inventive guitar playing and fierce rhythms. The other hand follows below.

First I'd like to focus on something that is easily overlooked. The undertones of Bettie Serveert are in the able hands of bass player Herman Bunskoeke, who lays the foundation for all the songs. Who listens more carefully though, will find that there are often melodies to be found as well in his playing, making a song so much more interesting to listen to.

I may be the only one, judging from the shows when most people around me start drooling when a song from 'Palomine' comes by, but Bettie Serveert is so much better than in 1992 and 2002. The songs are tighter, the dynamics so much better placed and there's still a will to experiment and incorporate what works. Take 'Whatever Happens'. It starts out as a pure singer-songwriter ballad, acoustic guitar and voice. In the chorus the band explodes, after which the mood goes down to a late night sequence, but all electric. Carol van Dijk is not afraid to sing to the edge of what she can manage. Yes, her voice is ageing, but listen to the beauty of it all. And then the song goes of in another direction again. One of the most beautiful songs Bettie Serveert ever did, with a small The Beatles nudge at the end of each chorus to top it off.

The way in which the band tries out something new and incorporates it into its own sound is just fabulous. It sounds as if a lot of work and preparation went into Damaged Good. All for the greater good. It expands the record beyond just the new Bettie Serveert album, something I've always welcomed since 'Lamprey' and with the exception of 'Private Suit' the band never disappointed me. However with 'Oh, Mayhem' and now Damaged Good something extra has happened. The band exceeded my expectations. Believe me, that is rare for me with a band that is around for a long time. I'm so pleasantly surprised to all what is going on on Damaged Good that words really are not enough. Listening in awe ought to suffice, but then you would not have had anything to read. The adventure a song like 'Deadly Sin (No,.7) presents, really is enough though. That Claw Boys Claw's Peter te Bos features on 'Love Sick' by then is just a pleasant footnote to Damaged Good.

There are many interesting new bands around in The Netherlands that have released one or two albums in recent years. Several have found its spot on these pages. The indie master called Bettie Serveert fends of the competition easily. Damaged Good is, I know I'm in a lot of trouble coming up with just a top 10 at the end of this year, one of the great records of 2016.

You can listen to 'Never Be Over' here: