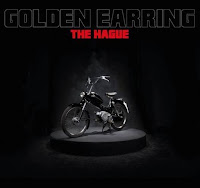 Two icons on one cover. Dutch rockers Golden Earring and that 60s to mid 70 icon before the Japanese Yamahas and Hondas took over. The moped with a high steer, every young boy's dream.

Golden Earring celebrated the fact that 50 years ago it entered the Dutch singles charts for the first time with the beat single 'Please Go', written by George and Rinus and sung by Frans Krassenburg. In many ways a totally different band than it is now. With the first member turning 70 this year, Golden Earring is still going extremely strong.

This winter WoNo Magazine exists 15 years. In one of the first issues there was an article on everybody his own Golden Earring, that many generations have their own Golden Earring moment. All those years down the road, it's time for a second post on a new record by the band, after 'Tits And Ass' in 2013.

The Hague is a five songs EP in which several aspects of Golden Earring come forward. It may well be that everything they play and sing here have been done better in the past -it may well be inevitable after 50 years. As far as I'm concerned the five songs all have the the Earring factor. 'Je Regrette' has that Earring rock vibe laced with a dark saxophone and soulful ladies singing "ooh" in the background. Add a dirty slide guitar, a fiery guitar solo, a dirty backing vocal and a high voiced 'Je Regrette' by George and there's an Earring song to like.

'That's Why I Believe In her' has a Status Quo intro and a chorus that I just have to like. Again there's a great slide guitar. The song is deliciously up tempo. The rhythm may be totally straightforward but forceful and absolute rocks. A song which I love to hear Cesar drum. There are these little, small extras on cymbals that add to the sound instead of just driving the song forward.

The song I liked the less when listening for the first time to The Hague was 'My Lips Are Sealed'. The 'Star Wars' sort of lyrics about gladiator shields and stuff, do not match the age of the band. Listening and settling into the EP, things changed. The song won in depth, especially when George starts to sing over just a piano. The variations in the song make it a winner anyway. A great riff also straight after. It's no 'She Flies On Strange Wings' but then what is? Nothing beats that song. The ending of 'My Lips Are Sealed' is grand; great playing, singing and drumming.

'Did I Make You Up' is as dreamy as the lyrics are. Again the saxes make the song stand out together with the singing melodies. Something jazzy is allowed into the dreamy rock. Care and craft come together in the song. Several options were sought for and found. They fit together beautifully.

Finally the ballad side of the Earring is allowed in with the final song 'Come On Home'. The into reminds me a little of 'Venus And Mars' of Wings. In the acoustic guitar and the lead line. After that it all changes. The lead riff is a familiar one from Golden Earring's own oeuvre. The way the song develops makes it a true Golden Earring song, with again a more serene sequence in which George excels. This band has two great singers and three great musicians.

The Hague is a nice addition to the large oeuvre of Golden Earring. Let's face it, the band is in overtime and when it comes up with five new songs that are just so much fun to listen to, we, the fans, are in luck. Enjoy it while we can and pay homage to a great band.

You can listen to 'Je Regrette' live here: