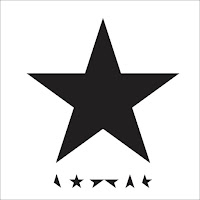 The news just came in. David Bowie died. This review was ready for this morning. So, as a first tribute this review of a fantastic new album.

Come 8 January,  I always get up and congratulate David Bowie in my mind. Bowie, my teenage hero, but also someone who will never leave me, despite the fact that I'm much less a fan than I was circa 30 to 40 years ago.

Come 8 January, a new album is released on his birthday, again. As I happened to be in town, I decided to buy it on impulse. Despite what I had heard and read before. Call it for old times sake. But was I confirmed in my negative thoughts or even disappointed? Please read on.

The song that I had heard was the long opening song. It's name is what the cd cover shows: a black star. That's all, so let me call it 'Blackstar'. The one with that long video, experimental, music and video, with the mysterious lyrics. The one that made me think, I do not need this album. Boy, was I wrong. Yes, the album is experimental, with a lot of difficult rhythms, tending to dance without being very danceable, what is going on is of an extreme high level of making music.

I'm already into my third listening session in one day. By now I'm pretty much convinced that I'm listening to the sort of Bowie I want to listen to. At the same time I'm totally aware that part of Blackstar, is what turned me totally off in the second half of the 90s when Bowie wanted to turn his fans into dance fans. It's that album with the multi colour coat, that I do not possess. I'm nearly 20 years older also and am used to all sorts of sounds that I still don't like mostly, but sometimes have started to appreciate as well. They work miracles at times on Blackstar though.

'Blackstar' runs for about ten minutes and is weird, beautiful, mesmerising, horrible and more within that 10 minutes. On top of all that it is mysterious. So much happens in that ten minutes. What kind of rhythm is this? One and two, three and four. Something like that? The village of Ǿrmen, in Norway features in this song. A song that has several "normal" passages and total experimental parts. The village even had a railway station, since 1914, but no longer. It's this interesting that Wikipedia mentions this part. Leaving the town called "Serpent" behind us, candles and all, 'Blackstar' has the main feature of Blackstar within it. No matter what the music does, Bowie sings, with his aged voice, free flowing melodies. The inherent contrast between the experiment and the traditional is ever present within this 10 minutes. Nowhere is it so gloriously present on Blackstar as here. Having overcome my initial fright of late last year, I'm starting to be convinced that I'm listening to a masterpiece on the same level as 'Paranoid Android'.

'Tis A Pity She Was A Whore' starts as ambitious, loud and wild as Arctic Monkeys' 'The View From The Afternoon'. The drumming is just as fierce. There all comparisons stop. The outing here is jazzy, Bowie's voice is shakey, even weak, but befitting the atmosphere. The feeling gets over me that Bowie was able to morph his greatest form of the 70s with the options the studio offers in the second decade of the 21st century. When I play the record a little louder the sound just envelopes me in an extremely positive way. The effect is so much larger than just loudly played music. It adds to the quality significantly. The music comes from all over the place, as if the musicians are actually present in different corners of the room. With the horns over the place. The electronic elements come out 100%. This record was recorded and mixed with extreme care.

'Lazarus' underscores all this. It comes close to a ballad in tempo, but is all but one. The singing is drawn out, relaxed, the band is allowed to go all out. The jazz horns go all the way, the drums are nearly a lead instrument, so high placed in the mix they are.The loud, menacing, near threatening guitar strum is impressive.

The rhythm goes all out again in 'Sue (Or In A Season Of Crime)'. I have a harder time following Bowie here. Again there is the difference between the slow singing of David Bowie and the all-out rhythm. The vocal, with some (a lot of?) imagination, could be sung by Bing Crosby or Sinatra, who couldn't have dreamed the music beyond their wildest imagination. Bowie manages to keep up this tension throughout the whole album. A blend between different worlds. The 1970s, the 2010s and an older man with his feet planted firmly in both eras.

Again David Bowie worked with the producer with which he worked when he finally managed his real breakthrough, Tony Visconti. The two oldtimers, 69 and 71, have made a current and modern album. An album also that is much more relevant than their previous effort, 'The Next Day'. There I was more surprised that there was a Bowie album, than that I, in the end, really liked it. I honestly can't remember when I listened to it for the last time. Early on in 2013 is my best guess.

If anything Blackstar has surprised me in a very positive way. What a monumental album! David Bowie has released a new album which a can truly stand its ground with those great albums of the 70s. It's different, as it should be 40 years down the line. The quality of 'Dollar days'? You can lay it against any ballad of Bowie's lead era. Blackstar is that good. At that point into the album 'I Can't Give Everything Away' still has to follow. With Blackstar one of the most important records of 2016 already has been released.

You can listen and watch 'the song they call Blackstar' here:

or buy Blackstar here on Bol.com