Tied To the Moon. Rachel Sermanni 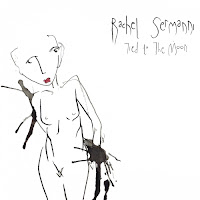 The first thing I noticed on receiving this cd was the similarity in style in the artwork with Laura Marling. Both are seemingly simple lines leading to a clear picture. One of a woman, the other of a mountainous landscape. Is that where the similarities stop? Not completely as Rachel Sermanni in her more quieter songs moves into folk territory. That is not the only side to Ms. Sermanni though. She likes to rock out a little as well. The difference is that where Erwin Zijleman sings the total praises of Laura Marling, I tend to listen more to Tied To the Moon.

Rachel Sermanni is from Scotland. 23 Year old and this album is her second after 'Under Mountains' from 2012. No, I haven't heard that album. With that out of the way, it is easy to state that the music on Tied To the Moon in nothing reminds me of Scotland. This music could just as easily have come out of the U.S. The more folky tunes certainly. There are banjo's, pedal steel guitars and acoustic guitars. Combined with the clear, mid-high singing voice of Rachel Sermanni this sets a mood that I often hear on the alt.americana, folk, country albums that cross the pond.

The album starts out with an (alternative) rock song. It was either 'Run' or 'Tractor', I think the latter song, that attracted me to Tied To the Moon. Because of this experience my expectations lay somewhere very different than is on offer. The differences in styles is also the reason that a review was somewhat slow in the coming. I really had to delve deeper to start appreciating the other songs. That started happening, slowly but surely.

Let's return to 'Tractor', as that song started my fancy. Dark toned, somewhat mysterious, with Rachel Sermanni almost underachieving as a singer. She's so cool here. There's something of The Walkabouts in this song. The soft voice versus the beast let loose on guitar. If I had been a dancer, I'd know what the rhythm here is, unfortunately, at least for this review, I'm not. But it could be a waltz or some sort. The sound of 'Tractor' is extremely open and clean. Even when the guitars growl. A good song to start an acquaintance to Tied To the Moon with. Even if it set me off on the wrong foot.

Opener 'Run' has the same space in the mix. Lucinda Williams' rockers come to mind. Only in the music though. The singing is so much more angelic and lighter. The girl versus the older woman who's lived too hard. The music finds that deepness though. A strange but successful mix of tightness and looseness. 'Run' holds this mystery, as if there's more than just the song, something that can not be heard, but has a place in the mix any way.

The Walkabouts come by again. 'Wine Sweet Wine' uses a cello in the exact same way, although I could use 'Nirvana Live in New York' or other examples as well. It has more to do with the whole atmosphere of the song and Rachel Sermanni's voice that I mention the former band. Carla Thorgerson is just not far away here. 'Wine Sweet Wine' already winds the tempo down, in a beautiful way. It is with 'Old Ladies Lament' that I was totally surprised. The change is so abrupt. Just a girl and her guitar and in a very slow, empty song. All that I did not expect.

So who is the real Rachel Sermanni? In the bio it says that Sermanni travelled to Nova Scotia after an invitation by Old Man Luedecke (who isn't old at all) to work on new songs, for four days in total solitude. With a bag of them, six of which she used four, she returned to her own home and started recording with producer Colum Macleod and her band members. In Macleod's living room no less. It also says that on her new album Rachel Sermanni moves into new, unchartered musical territories in her career. That may be, but I don't care who she really is, as it must be both. I like the harder songs just this little better, but am certainly appreciating 'Don't Fade'. A deep mystery just flies out of this song. There are atmospheric sounds popping up and disappearing just as easily. The acoustic guitar and the piano play their sparse and sparser notes. 'Don't Fade' shows a deep understanding of what a song can achieve and may be the best song on Tied To the Moon. The change to 'Tractor' is a beautiful one. A great mood change, so well placed on the album.

After that things get real quiet and I'm still finding my way around there. I already fell deeply for 'Don't Fade', so who knows what will happen in the future. So far it is only the song about the old lady that is to neat for me. Compared to all other songs, so little is happening there. 'Ferryman' holds the banjo, while Ms. Sermanni is using her voice differently. The songs that follow move into a mix of singer-songwriter and folk. 'Banks Are Broken' is an interesting duet. The dark voice contrasts in the right way with Rachel Sermanni's.

The album ends with the folk noir of 'This Love'. A dark mood moves over the album again, where the previous song 'Begin' was so much lighter. Rachel Sermanni keeps playing with the mood of her listeners. That makes Tied To the Moon something of a rollercoaster albeit one that is dragged upwards most of the time. More suspense than release. And with that conclusion I am able to write that Tied To the Moon is an interesting album, at times extremely good album that intrigues and invites the listener to keep doing just that. Not perfect, but good is definitely good enough here.

You can listen to 'Tractor' here: