My Love Is Cool. Wolf Alice 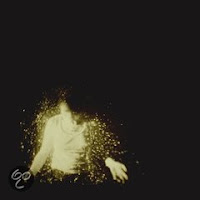 If the love of Wolf Alice is cool. Come on over, now, please! This country is sweltering under extreme warmth, so some coolness is very welcome. In a few days unfortunately this entree will not make any sense anymore, but so be it.

Whatever I read about Wolf Alice, the band that recently released its debut album, it always has to do with folk music and that the band in the recent past for some reason left this music behind. That is two points for Wolf Alice already, for who in 2015 in his right mind is anticipating another "hey - ho" album. Now that even Mumford & Sons, the banner bearers of the neo-folk movement, have switched to stadium sized rock songs, who was Wolf Alice to stay where it was? A smart move in my opinion.

All this still doesn't say anything about the music Wolf Alice makes on My Love Is Cool. The answer to that is somewhere between dream pop, indie rock and some hints at gothic singing. The guitar, more specific electric ones are what drives the music of Wolf Alice. Long held, distorted tones in a distinct mix between chords and atmosphere.

For me there are two Wolf Alices. One that I play on my headphone and one that I tried playing on the stereo. For some reason there's a large difference between the two media. The latter doesn't make much of an impression. Whether it is the quality of the promo record, the mix, or a non-compatibility with my stereo set, I can't tell, but the music goes in one ear and leaves the other, almost unprocessed, muddy sounding. The former shows a sense of melody, depth and intricate inter play between the band members, making My Love Is Cool come alive and o so interesting. So what I'm writing here is based on my ear phones experience.

Wolf Alice started out as duo in 2010. Ellie Rowsell and Joff Oddie released one EP together, after which Theo Ellis (bass), and Joel Amey (drums) joined in 2012. After another EP and a few singles, the band released its first full length album recently. If anything My Love Is Cool proves that the band is more than ready for the release. The songs on the album are mature, arranged well and clearly played with a clear concept in mind.

Focal point is the voice of Ellie Rowsell. She sings everywhere between Lily Allen, Jerney Kaagman, the lady from Garbage and the two Veruca Salt ladies. More than once Wolf Alice reminds me of the early Earth & Fire, the Dutch sympho rockers, at least in the first half of the 70s part of its career, despite that the music on offer does not have anything much in common at first hearing. Especially when the band goes into the alternative rock direction. 'Giant Peach' is another classic Veruca Salt song. Somehow this name keeps popping up in my reviews lately. Earth & Fire is in the way certain chord changes are presented and in the singing.

That things are serious around Wolf Alice is in plain sight. Producer Mike Crossey has made a name for himself with bands as big as Arctic Monkeys. He is around when a band breaks, so must be doing something right. What he managed to capture is the sense of urgency Wolf Alice lays in her music, without giving away any on the moods the band can portray. The band is able to play with the mood of its listeners. From lightness all the way to darker moods, Wolf Alice takes you there and beyond. It's this mix that makes My Love Is Cool really interesting. If anything this album is far from one dimensional. There is something to discover for everyone.

Not that the music on My Love Is Cool is unique, but that is beside the point. Bands have influences and show them, some more others less so. Wolf Alice manages to work with these influences and finds interesting new songs that prove that they add to what went on before. Hence, there is a mix of some 80s synths, 90s alternative rock, some Coldplay in the atmosphere and hints at the folk they left behind, hidden in the more quiet songs. In the end I like Wolf Alice best when the band gets it foot off the brake and lets it rip. 'Fluffy' is a really great alternative rock song and there are a few more as well.

In short My Love Is Cool is an extremely satisfying debut. Wolf Alice shows that it is able to write and play very different songs and present them in a way that makes the album of a convincing unity. With Ellie Rowsell it has a front lady that can truly sing with a few voices, while drummer Joel Amey can take over also very adequately. A better version of Sons & Daughters in that way. Wolf Alice is a band to follow in my opinion.

You can listen to 'Bros' here: