The double EP - A sea of split peas (2). Courtney Barnett 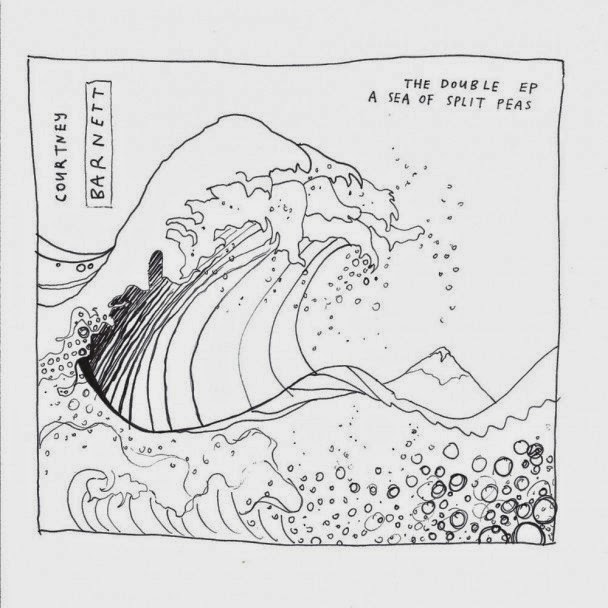 Several months back it was Erwin Zijleman who brought Courtney Barnett to this blog. It's about time that I start to sing my praises of this double EP album, by Australian singer Courtney Barnett.

What an intriguing cover this cd has. It looks like a wave, but could be the beak of a giant dragon or a hollowed out hill; death defying challenging gravity. With flowers growing out of a wave? And a snowed mountain top in the background? Or all just waves and bubbles? The music of Courtney Barnett is just as intriguing as the sleeve. The album, which is a compilation of two previously EPs, kicks off with 'Out of the woodwork'. This rolling song just continues and continues with its piano played in a lazy boogie style, the fine guitar work and over this all the slightly whining, but beautiful voice of Courtney Barnett. The tone is set for an Australian singer-songwriter who announces herself on the international stage. Although the album was released over a year ago in her home country, it has finally reached Dutch shores as well.

Listening to Courtney Barnett it is not difficult to call Angel Olson to mind, the artist who featured twice on this blog a few months back. Like Olson Barnett can sound quite undercooled, while at the same time she can conjure up sheer beauty with a minimum of effects. Barnett is more open though. In that she is not unlike the young Dylan, the one who just went electric in 1965. 'Avant gardener' is a new Dylan song 49 years after the fact. A bit muddy, slightly blues based, loosely played with stunningly beautiful effects. That 'ooh-ooh-ooh' is one well, not to die for, but certainly worth meeting the ambulance paramedic Courtney Barnett sings about in 'Avant gardener'. And with that conclusion I've also realised for the first time how punk Dylan was in 1965. It may not be for nothing that she sings a song called 'History eraser'. What does it matter what people think of something at the time it happens, it is about how we look at something or the impact it has now.

Courtney does not make 2014 music. Everything that is on the first EP, originally called 'How to carve a carrot into a rose', is 1960s and to be more precise the second half of that decade. The rocker 'David' may have some Status Quo and 'The jean genie' in its rhythm, the atmosphere is 60s. It is with the slow and lingering 'Anonymous club' that Barnett allows her voice to go up and lets more emotions into her voice and creates another highlight on The double EP. That makes six in a row.

The second EP is 'A sea of split peas'. It's here that another influence shows itself, Nirvana and to be more specific the Nirvana "ballads", like 'Polly' or 'Hate me', that sort of Nirvana. The lyrics to 'Lance Jr.' are just as revealing as the influence. Still, it's good to know that she only does it to fall asleep. That can't make one deaf. Besides, that's the last thing a musician needs, deafness.

'A split sea of peas' is somewhat more elementary than the first six songs. A guitar, bass and drums. Gone is the fun piano and the layers upon layers of guitars. This makes the songs harder to instantly like. Courtney Barnett makes me work harder to like her. 'Are you looking after yourself' is almost 8 minutes long. It just goes on and on, bringing me on the brink of a trance or deep irritation, depending on my mood of the day. Why not a little Creedence?, Courtney also must have thought and wrote 'Scotty says'. The guitar notes and rhythm are so John Fogerty, while the vocal melody is so, well, Courtney Barnett.

To me its clear that I like the first half of The double EP better than the second half (and then she comes up with the deliciously beautiful 'Porcelain'!). That conclusion does not take anything away from the fact that Courtney Barnett is a talent that released her full sized album just exploding with confidence and alternative rock music in many different guises. Barnett may dip her guitar in alt.americana, punk, Dylan blues, 60s psychedelia or whatever, in the end it is rock non the same. From The Stranglers like punk eruptions to a punky Dylan, all is there. All songs sung with this undercooled voice, like nothing matters, while each and every song shows otherwise. Courtney Barnett is a singer-songwriter to follow. The double EP - A sea of split peas is Courtney Barnett, nothing more but certainly nothing less.

You can listen to and buy 'How to carve a carrot into a rose' here http://store.milkrecords.com.au/album/ep2-how-to-carve-a-carrot-into-a-rose.