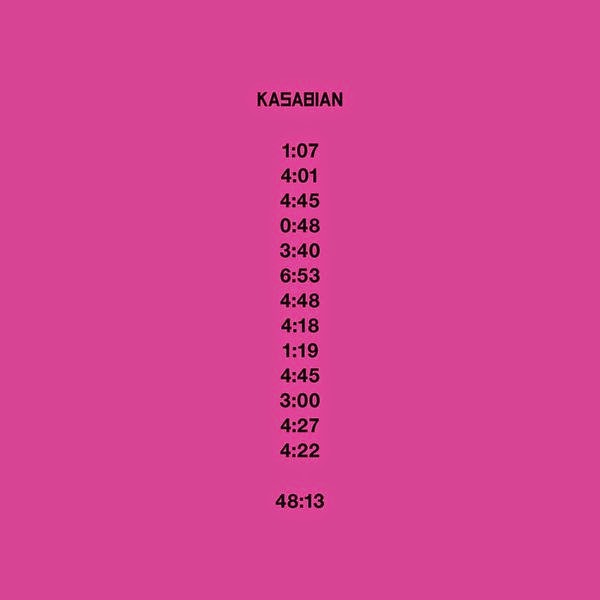 Was there ever a greater contrast between the cover and the content on offer? If you think there is, please let us know by responding as we are certainly curious to learn. Kasabian produced one of the most uninspiring and plain ugly covers ever, while the music is the best they have offered to date. Singer Tom Meighan said so himself and I back him up on this. 48:13 is a fantastic album!

48:13 starts with total silence. The first seconds can be subtracted from the mentioned 13. Then drones fill my ears, slowly transforming into a Pink Floyd prolonged intro. It doesn't take 10 minutes before something happens though. After an extremely short eastern motive the party starts. '(Shiva)' moves over for 'Bumblebee', which just pounds away in a by now well known combination of dance beats and rock guitars. Kasabian is at ease with 'Bumblebee'. The way the song is allowed to explode and relax is not just sheer effect. Yes, it's easy to picture a field filled with exploding fans each time the band releases this jolt of energy. It is not just effect. The song is extremely well balanced as well.

The sound is a mix of Oasis attitude, Happy Mondays jumpiness and Primal Scream effects. Next to that Kasabian is also able to write a memorable melody. 'Stevie' is a good example of this combination. When the song is flashed out more and more, the more impressive it becomes. A little The Beatles come in as well. A string section, double melody lines, it just gets bigger and bigger, but the chorus melody is one that crept into my head and refuses to go away. And that hasn't happened to me with Kasabian since 'Processed beats' from its 2004 debut album. 48:13 is, well almost, as adventurous and fun as A Brand's 'Judas'.

Mentioning A Brand implies that a shot of disco (or soul as it was called pre 1977) is infused into loud rock music. 'Treat' has this quality, multi vocal layers, loud guitars and a melody to loudly sing along to live. And danceable like crazy. The pulsing synth just finishes it all off. Kasabian crosses not only over time and space in convincing ways, but over genres as well. Certainly when some psychedelia is let in in 'Glass'. At that moment the influence of the band that influenced nearly everyone, The Beatles, is bared most. In the beat driven songs the influence hovers just below the surface, in 'Glass' it surfaced. But, together with the interlude '(Leviathan)' 'Glass' is not the strongest part of 48:13 though.

The fun starts again when the tempo goes up. 'Clouds' again has this mix of The Stone Roses and Oasis, with some Traffic psychedelia right on top of the beat, "Rise above the clouds" as Meighan sings. The first single, 'Eez-eh', lays it on the thickest of all. Totally electronic, purely aimed at dancing, although there is a hint of angst in there as "we're all being watched by Google". But the rest is nothing but fat, fast beats and electronic pulses and melodies.

To compensate Kasabian strikes back with a sort of ballad, 'Bow'. Something it gets away with quite easily, to finally wind it all down with the even slower and acoustic 'S.P.S.' There's even a lap steel in there or at least that whining effect. A small beautiful ballad without any electronic effects to mention.

Kasabian unleashed an album on world that at first seems business as usual, but becomes just a little better each time I played it, to finally reveal some other sides to the band as well. Kasabian does so in a convincing way. Like I said, 48:13 may have a dip or two, as a whole it's Kasabian's most consistent album to date. If that is because Kasabian appraoched the album without fear, just like its debut album, I'd say this is the way ahead, gentlemen.

You can listen to 'Eez-eh' here.